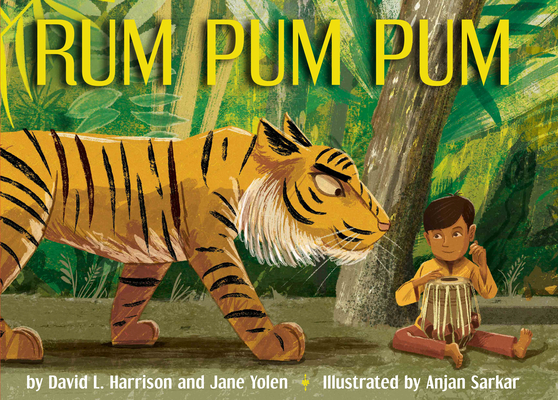 "Rrrrh!" means "Let's be friends" in tiger talk, but the other animals don't understand him and run away! Maybe the gentle "rum-pum-pum" of the drum can help him.

Fun animal sounds in a story about friendship, communication, and music. A perfect story time read-aloud!

The lonely tiger finds a drum. He strikes it with his tail--and friends start to follow: a monkey who says "chee-chee-chee" which means "I will come too" in monkey talk, a rhino who says "ouggh" which means "I will come too" in rhino talk, a parrot that says "scree-awk," a chameleon, an elephant, and eventually a child--who is now reunited with the drum he lost. Because of the drum, the tiger is no longer lonely and friendless.

Information about tiger conservation is included in the back.

The authors are the two most beloved contemporary children's books author-poets.

"The book’s earth-toned illustrations are stunning: Each page is packed with movement and atmosphere, and the characters’ faces are wonderfully expressive. The text is poetic, rhythmic, and, at times, humorous."—Kirkus Reviews

"As Tiger traverses the forest, other animals take a chance and accompany the big cat and his gentle 'friend,' adding their voices to Tiger’s ' Rrrrrrrrrrhhh' and Drum’s 'Rum pum pum.' Monkey, Rhino, Parrot, Chameleon, and Elephant make up the rest of the parade through the lush green-and-gold Indian forest. The phrase 'And they went along and went along and went along the road' recurs, giving the story the feel of a folktale."—Booklist

"The classic folkloric markers help this cumulative neo-tale along with lulling rhythm and inviting animal characters, and the sound effects of the gathering animals cry out, literally, for audience participation. . . . This has storytime written all over it, and it could also be a creative addition to a music class"—Bulletin of the Center for Children’s Books


Jane Yolen is an author of children's, fantasy, and science fiction, as well as a poet, teacher, and reviewer of writing. Her previous books have won the Caldecott Medal, two Nebula Awards, two Christopher Medals, the Golden Kite Award, and the Jewish Book Award, among many others. Rum Pum Pum is her first book with Holiday House.

Anjan Sarkar started his career in children's illustration after being inspired by drawing with his children. Since becoming a full-time illustrator, he's contributed not only to children's books, but also animation and advertising efforts. He works from a studio in his house in Sheffield, England, where he lives with his wife and two kids.