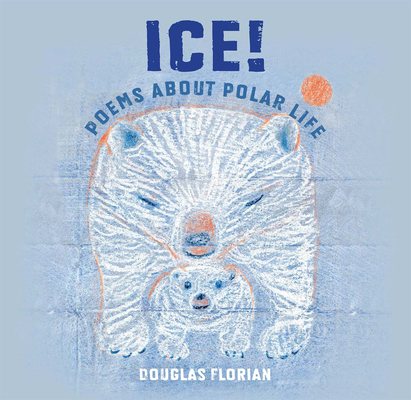 A Kirkus Reviews Best Book of the Year!

The remote North and South Poles-- which poet Douglas Florian calls our "Earth refrigerator"-- are home to a wide variety of unusual, rarely-seen creatures including caribou, penguins, ptarmigans, narwhals, and many more! Young readers will love learning about these polar denizens and the ways they've adapted to their cold, windy, frozen environments.

Whimsical, colorful art and humorous poems introduce more than a dozen polar animals, and touch on the unique characteristics of the polar regions. Funny and educational, the book ends with an inspiring call to action about climate change, reminding us of our responsibility to take care of our planet.

Ice! Poems About Polar Life explores key scientific concepts such as animal adaptation, biomes, global warming, and interdependence in poems filled with rhyme, rhythm, figurative language-- and a huge dose of humor! Artist and author Douglas Florian is well-known for combining poetry, art, and science in books that have wit, imagination, and an aesthetic sensibility.

★ "There are lots of surprises in the inventive wordplay along with twisted syntax that gets the point across while invoking giggles from young readers. . . . Full-page illustrations, rendered in colored pencil and pastel, accompany the verses and capture the essence of each creature with great imagination and childlike innocence. Color abounds, not only in the illustrations, but also with bright blocks of orange, purple, blue, yellow and more that background the poems. Florian is a master of light verse with a purpose, and he matches it with art that charms. Thoughtful, fun, and delightful."—Kirkus Reviews, Starred Review

"The delightful illustrations are a highlight. Each poem is complemented by at least two of Florian’s pastel drawings. . . . a terrific example of poetry and the wonder of the natural world."—School Library Journal


"In typical Florian fashion, the rhythmic poems, mostly told from the animal’s perspective, use rhyme, wit, and occasional puns to give kids a taste of the animal’s physical characteristics, habitat, diet, adaptations, or other special traits. . . . As always, much of the humor comes from Florian’s distinctive, childlike mixed-media illustrations on paper-bag backgrounds. The final poem, 'Climate Change,' urges young readers to care for these animals and their environments. A funny yet socially conscious collection." —Booklist


"The poet’s quick rhyming lines and Ogden Nash–like love of a concluding pun on are full display here."—The Bulletin of the Center for Children's Books

Douglas Florian an award-winning poet and fine artist who has had much success with poetry collections that he has both written and illustrated. Frequently using wordplay, rhythm, and rhyme in his poetry and crayons and paper bags in his illustrations, he consistently uses humor to engage his young audience. He has written and illustrated two I Like to Read® books for Holiday House, Pig Is Big on Books and Pig and Cat Are Pals. He has read his poetry at Carnegie Hall, the Museum of Modern Art in New York, Poets House, and The White House, and his abstract paintings have been exhibited in numerous solo and group shows. He lives and works in New York City.
Loading...
or support indie stores by buying on