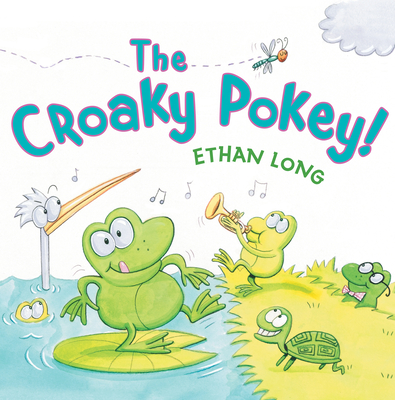 This groovy spin on the Hokey Pokey is sure to have the whole family on their feet! Now in fun-size board book format.

In a zany variation on the beloved song and game, an unsuspecting fly suggests to a group of musical frogs that it’s time to do the Croaky Pokey. Each goofy frog gets a chance to show off its dance moves, hopping and bopping around the pond. But will the fly figure out that these frogs are really after some lunch? That’s what it’s all about!

From a Geisel Winner and Daytime Emmy Nominee, this musical story is the perfect at-home readaloud or classroom tool to get preschool kids moving.

Praise For The Croaky Pokey!…

"Long . . . has a gift for conveying manic, obsessive personalities (he's a master of the googly eye), and he has found a great match in a song of relentless, rote cheeriness. The Hokey Pokey will never look the same—and that's a good thing."—Publishers Weekly

"Children will giggle throughout, especially at the surprise ending, and will be singing and dancing along in seconds flat. A nice choice for school and home and a good choice for reluctant readers, full of energy, humor and fun."—Kirkus Reviews

"Long's energetic illustrations are done in watercolor and colored pencil, and their cartoonish style adds to the fun."—School Library Journal

Ethan Long’s books for children have nearly 2.5 million copies in print, including Pug, which recieved a starred review from Kirkus. Ethan won a Theodor Seuss Geisel Award for Up, Tall and High and got a daytime Emmy nomination for his animated series Tasty Time with ZeFronk, which aired on the Disney Channel from 2008–2016. He lives in Florida with his family.
Loading...
or support indie stores by buying on
(This book is on backorder)