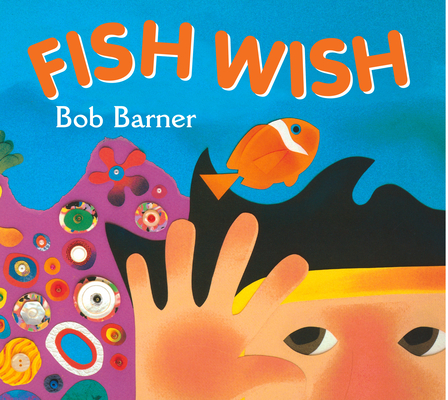 An underwater fantasy comes to life in this board book with colorful cut-paper art that will spark the imagination of young readers.

A daydreaming child imagines himself under the sea, where turtles glide by and a cloud of jellyfish float above. The boy gets to play with sea horses, shrimp, and crabs, swim through octopus tentacles and squid ink, and goes to sleep tucked among a dazzling school of starfish. Vibrant collage illustrations depict a whimsical world of ocean life.

* "Barner's use of layered paper and found objects adds both texture and depth. The parade of saltwater characters (everything from turtles and dolphins to sea horses, squid and jellyfish) come together in a visually dynamic and informative grand finale."—Publishers Weekly, Starred Review

"A well-designed picture book, as simple and pleasing as a sea star."—Booklist

"A dazzling introduction to the creatures living in the increasingly threatened environment of a coral reef. . . . A fresh and appealing look at a fascinating environment."—Kirkus Reviews

"This engaging picture book with its simple and bright illustrations offers a creative introduction to the natural world of the sea."—School Library Journal

Bob Barner is the author and illustrator of more than twenty-five books for children, including Fish Wish, Bugs! Bugs! Bugs!, and the bilingual Day of the Dead/El Dia de los Muertos. His work has received the Parents' Choice Award and the Teachers' Choice Award. An accomplished artist, he began his career as a cartoonist working on Li'l Abner under Al Capp before moving on to art direction and illustration. His clients include The Boston Globe, Scholastic, Chronicle, the New England Aquarium, Little, Brown, and many more. He lives in San Francisco, California.
Loading...
or
Not Currently Available for Direct Purchase