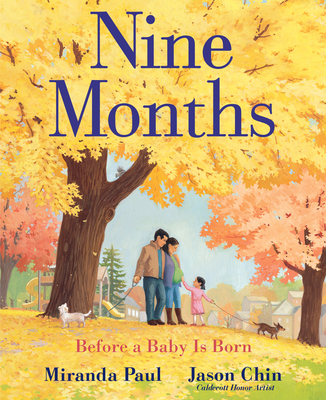 Before a Baby Is Born

Join a family of three who spend nine whole months waiting, from a frosty winter through a sun-dappled summer, until finally . . . a baby is here.

A soon-to-be big sister and her parents prepare for the arrival of a new baby in the family. Alternating panels depict what the family is experiencing in tandem with how the baby is growing, spanning everything from receiving the news about the new baby to the excitement of its arrival.

In this pregnancy book unlike any other one out there, watch what's actually happening through meticulously detailed, actual size illustrations, perfectly paired with a lyrical yet informative text, and culminating in a warm, joyful birth scene.

Complete with backmatter that includes an elaboration on pregnancy, a list of amazing things babies can do before they're born, and more, Miranda Paul and Caldecott Medalist Jason Chin deliver another spectacular nonfiction picture book.

Praise For Nine Months: Before a Baby Is Born…

★ "[T]his isn’t just a story about the nine months of gestation; it’s also a tale—told mostly with illustrations—of a family happily awaiting a baby’s arrival.  As left-hand pages track a zygote’s transformation, first into an embryo (there’s a tail!) and then into a fetus, right-hand pages show slice-of-life scenes of a mom, dad, and soon-to-be big sister (details in the watercolor and gouache illustrations indicate the family is Latinx). . . . During the third trimester, the left-hand illustrations begin to push onto the right-hand pages, ultimately taking over the entire double-page spread. It’s another whimsical touch in this joyful celebration of the nine months leading up to a baby’s birth."—The Horn Book, Starred Review

"[T]he real value lies in the blend of informational text and illustrations that will allow kids a concrete sense of the growth covertly occurring in the maternal abdomen. Chin’s intrauterine illustrations start oversized . . . but the little one quickly catches up and art is to scale; then she begins to push across the spread gutters as her size becomes too large to be contained to a single page. The result is a solid family discussion starter about a possible new addition to the family that allows a listening kid to take the questions in a medical or emotional direction or both, and fascinated youngsters will pore over the growth scenes and be stunned by the information that they, too, started that way."—Bulletin of the Center for Children's Books


★ "This touching book describes milestones both inside and outside of a mother's belly over the course of nine months. . . . Children both young and old will be captivated by the details of fetal development and the story of a family preparing for and welcoming a new member."—Kirkus Reviews, Starred Review


"It’s a riveting chronicle, full of wonderment and the kind of information that will allow even very young prospective brothers and sisters to track the progress of their own forthcoming siblings."—The Wall Street Journal

★ "Caldecott Honoree Chin's detailed gouache and watercolor illustrations skillfully depict the changes in the fetus month to month, they also show the family of three and their activities. Verso pages have drawings of the fetus developing while the recto pages show the family’s movements as they wait and prepare for the new infant. Pictures of Month Four through Month Nine reveal the actual size of the growing baby, while the illustrations of the first three months tell what the size would be and show a magnified illustration."—Booklist, Starred Review

★ "This appealing treatment of the subject strikes a perfect balance between biology—minus the birds and bees—and a gentle relevancy for young, soon-to-be siblings."—Publishers Weekly, Starred Review

"A bright, savvy heads-up for younger children in growing families; equally useful for shaping expectations and providing realistic glimpses of what’s going on inside a pregnant person." —School Library Journal

"Nine Months is a beautifully balanced celebration and explanation of how babies develop in utero, and how families prepare, just right for siblings-to-be and their parents." —Shelf Awareness

Miranda Paul is an award-winning author of children's books whose work includes Water Is Water (also illustrated by Jason Chin), Are We Pears Yet (illustrated by Carin Berger), and One Plastic Bag: Isatou Ceesay and the Recycling Women of the Gambia. She lives in Wisconsin.

Jason Chin is a celebrated author and illustrator of children's books. He received a Caldecott Medal for his illustrations in Andrea Wang's Watercress, a Newbery Honor book and APALA award winner. His book Grand Canyon was awarded a Caldecott Honor, a Sibert Honor, and the NCTE Orbis Pictus Award. His other acclaimed nonfiction titles--Coral Reefs, Redwoods, Gravity, and Island: A Story of the Galapagos--have received numerous starred reviews and other accolades. He is also the illustrator of Stephanie Parsley Ledyard's debut title Pie Is for Sharing, which has received four starred reviews. He lives in Vermont.
Loading...
or support indie stores by buying on