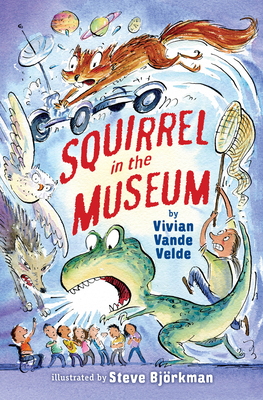 Squirrel in the Museum (Twitch the Squirrel #3)

Pandemonium breaks out at the science museum when Twitch the squirrel tags along on a school trip in this hilarious chapter book.

When Twitch hears that the school children are taking a field trip to the science museum, he decides he wants to join in the fun--so he stows away on the school bus and hides in a backpack to get in.

But as always, not everyone is glad to see a squirrel in their midst. Pursued by security guards, Twitch turns the exhibits into his own private carnival rides--swinging on a Foucault pendulum, riding a model Mars Rover, and skittering across the Bernoulli air pressure table.

Just when it seems like there's no escape, Twitch's chaotic romp turns up some surprises for the museum staff. . . and a friendly boy in a wheelchair saves the day for the squirrel, sneaking him back out.

With more than 50 energetic illustrations accompanying the short, hilarious chapters, Squirrel in the Museum is a perfect pick for young readers just starting to seek out longer texts--or a great read-aloud. For aspiring scientists, Squirrel in the Museum also includes an explanation of the scientific exhibits Twitch encounters--as told by the friendly science lab geckos.

Praise For Squirrel in the Museum (Twitch the Squirrel #3)…

"Infused with humor, the narrative offers the squirrel’s point of view, but in settings familiar to kids. Björkman’s lively ink drawings will bring smiles and even laughs. When a reader requests a short, funny chapter book, hope that this one’s on the shelf." —Booklist

"For this third title in a series that began with 8 Class Pets + 1 Squirrel ÷1 Dog = Chaos (2011), the author-illustrator pair have perfected their formula for entertainment—a limited perspective, slapstick humor, and nonstop action. . . . This field trip to remember will appeal to eager chapter-book readers, fans of talking-animal stories, and teachers looking for an engaging read-aloud."—Kirkus Reviews

"Twitch is an engaging character that should attract readers and they might even learn a little science as they follow his museum adventures." —School Library Connection

Vivian Vande Velde is the author of more than twenty books for children and young adults. She has received an Edgar Award, five of her novels have been named Best Books for Young Adults by the ALA, and 8 Class Pets + 1 Squirrel ÷ 1 Dog = Chaos was nominated for seven state awards. She lives in Rochester, New York.

Steve Björkman has illustrated many picture books, chapter books, and greeting cards. He illustrated both 8 Class Pets + 1 Squirrel ÷ 1 Dog = Chaos and Squirrel in the House, the two earlier books about Twitch. He lives in Aliso Viejo, California.
Loading...
or support indie stores by buying on