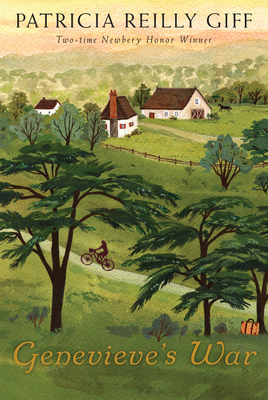 In this companion to the Newbery Honor-winning Lily's Crossing, thirteen-year-old Genevieve risks everything to defy the Nazis and join the French Resistance.

Winner of the Christopher Award!

It's not always thinking of being happy. Doing the right thing will make you happy.

Despite the farm-work and her irritable grandmother Memé, Genevieve thinks she may have found a new home in Alsace, France, where she spent the summer of 1939.  Without much to return to in New York, Gen is ready to see if this new life will make her happy.

But then World War II erupts. The Nazis conquer France.

Now everyone in Alsace must speak German, act German, and think German--or else. Even worse, a cold Nazi officer has commandeered a room in Memé's farmhouse--and he can tell that Gen and her grandmother aren't loyal to the Reich.

But Gen won't be cowed. And when her friend Rémy commits an act of sabotage, she hides him in the last place the Germans will look--in the attic, right above the Nazi's head.

For more thrilling historical fiction, don't miss Island War, a survival story set in the remote Aleutian Islands, occupied by the Japanese during World War II, and A Slip of a Girl, a novel in verse about the Irish Land War of the late 19th century.

"Genevieve's frequent quandaries about trust and betrayal in a changing landscape are timeless in their relevance. . . . Engrossing."—Kirkus Reviews

"Giff ably illustrates the physical and mental effects of war, and the heroism found in unexpected places and people. . . . Rich and engaging."—Publishers Weekly

Patricia Reilly Giff received two Newbery Honor Awards for her novels Lily's Crossing and Pictures of Hollis Woods. Some of her other middle grade novels include Genevieve's War, winner of the Christopher Award, Nory Ryan's Song, an ALA Notable Book, and Eleven. Her Kids of the Polk Street School series remain a popular chapter book mainstay. She has a doctorate in reading and spent twenty years teaching in New York City public schools.

Becca Stadtlander is an illustrator and fine artist. She is a graduate of the Maryland Institute College of Art and lives in Covington, Kentucky.
Loading...
or support indie stores by buying on