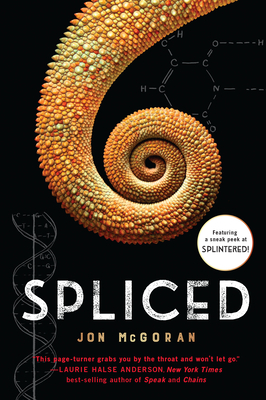 Sixteen-year-old Jimi knows people change, but nothing could prepare her for what’s about to happen to her best friend, Del.

Over the years, their friendship has been evolving—and Jimi is starting to wonder if they could become more than friends. But Del is obsessed with becoming a chimera: a person with animal features, achieved by splicing animal genes into their own DNA. It's a dangerous and controversial process, provided illegally by back-alley doctors called genies.

The dramatic physical changes chimeras go through have scared lawmakers into drafting legislation to declare chimeras officially non-human— taking away all protections under the law. When Del goes missing, Jimi is desperate to find him before he alters himself forever.

To save him, Jimi must risk her life—all while knowing that if getting spliced is the choice Del has made, it means he’s leaving her behind forever.  Unlikely allies and powerful enemies clash as Jimi questions her beliefs and uncovers closely-guarded secrets about her own past.

Set in a near-future society where technology is redefining what it means to be human, Spliced is part science fiction, part political thriller, raising questions about genetic modification and how we treat each other that will stay with you long after the final page.

The hardcover and paperback editions features a striking, texturally-embossed spot gloss cover, and the paperback features a sneak-peak at the heart-pounding sequel, Splintered.

"a very believable future seen through the eyes of a believable white teen for whom discrimination on the basis of visual difference has suddenly become real. This nightmare study in manufactured prejudice will resonate with many teens . . .  Timely, thrilling, and more than a little scary."—Kirkus Reviews

"McGoran extrapolates a believable, all-too-relevant future, but he wisely focuses on Jimi’s transformation from someone aware of but untouched by discrimination into a willing activist with an emotional connection. McGoran doesn’t skimp on the action, either, which is suspenseful and scary . . . This is a timely, thought-provoking start to a probable series."—Booklist

"A mind-bending science fiction adventure into a disturbingly familiar, near future world. Characters you care about and a plot that will send chills up your spine, Spliced has it all!"—Jonathan Maberry, New York Times bestselling author of Rot & Ruin and Mars One

"Intense and provocative, Spliced questions whether humanity is defined by our genetic make-up or our compassion. The haunting themes McGoran has created will resonate long after the final page is turned."—Joelle Charbonneau, New York Times bestselling author of The Testing and Dividing Eden

Jon McGoran has written several books for adults, including the D.H. Dublin series and the eco-thrillers Drift and Deadout, which Publishers Weekly called "outstanding" in a starred review. Jon McGoran is also a founding member of The Liars Club, a blog for and by writers. Spliced is his first book for young adults. He lives in Pennsylvania with his family.
Loading...
or
Not Currently Available for Direct Purchase