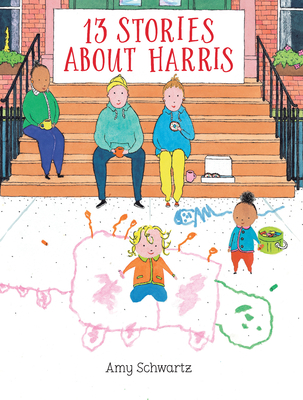 A wry and affectionate look at the ups and downs of preschoolers in the big city.

"That's why they call permanent markers permanent," Harris' mother says as she surveys Harris and his best friend Ayana's handiwork in his bedroom.

In 13 illustrated vignettes, young Harris gets into big and little adventures at home, at best friend Ayana's house, and throughout his diverse city neighborhood.

Inspired by her own child, celebrated author-illustrator Amy Schwartz captures a preschooler's sense of wonder and possibility, such as when Harris and Ayana vow to keep holding hands "forever and ever"--even while riding stampeding elephants.

Amy Schwartz has written and illustrated many celebrated books for children, including What James Likes Best, winner of the Charlotte Zolotow Award; Polka Dots for Poppy, a Bank Street Best Children's Book of the Year; Bea and Mr. Jones, a Reading Rainbow selection; and 100 Things That Make Me Happy, which received three starred reviews. Her work has also landed the New York Times Best Illustrated List and won awards such as the Jewish Book Award and the Christopher Award. She lives in Brooklyn, New York.

Praise For 13 Stories About Harris…

★ "This book is exactly what being a toddler is all about, and Schwartz shares it with simple language, wonderful art, and an attitude of sheer delight."—School Library Journal, Starred Review

★  "Bright, clean, colorful illustrations are set against generous white space for maximum impact and appeal. Schwartz has for decades been one of our most tuned-in, honest, and sympathetic chroniclers of childhood; here she is at her absolute best."—The Horn Book, Starred Review

"The illustrations are classic Schwartz, with finely drawn, carefully composed vignettes in vivid colors of children at play. The stories’ pacing varies, but each one gets it just right. . . . Put 13 Stories About Harris into the hands of young readers ready for a baker’s dozen of whimsical tales."— Book Page

"Organized into a baker’s dozen of vignettes, each of the book’s chapters is full of charm and understated humor." —Foreword Reviews

"Schwartz’s simple, straightforward diction maps precisely to her delicate line drawings to create nostalgic snapshots that demonstrate the way magic can be found in the mundane."—Publishers Weekly

"Because of their brevity, the chapters leave room for listeners to embellish the stories with their own creativity . . . . Harris gets into some mischief, but the book’s tone remains gentle and warm." —Booklist
or support indie stores by buying on
Copyright © 2020 American Booksellers Association