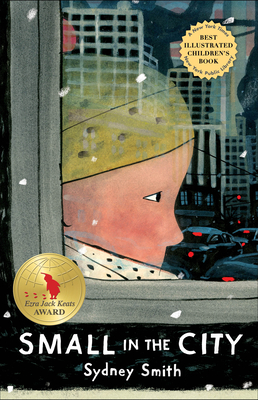 Small in the City

It can be a little scary to be small in a big city, but this child has some good advice for a very special friend in need.

It can be a little scary to be small in a big city, but it helps to know you're not alone.

When you're small in the city, people don't see you, and loud sounds can scare you, and knowing what to do is sometimes hard. But this little kid knows what it's like, and knows the neighborhood. And a little friendly advice can go a long way.

Alleys can be good shortcuts, but some are too dark.

Or, there are lots of good hiding places in the city, like under a mulberry bush or up a walnut tree.

And, if the city gets to be too much, you're always welcome home, where it's safe and quiet.

In the first book that he has both written and illustrated, award-winning artist Sydney Smith spins a quiet, contemplative tale about seeing a big world through little eyes.

Praise For Small in the City…

"'Small in the City' is the best picture book I've seen so far this year, and among the most moving I know. For the right child it will be revelatory."—The New York Times Book Review

"A child braves strange streets in search of a mysterious someone in this gorgeous story about love and loss."—People Magazine

"Some picture books make you want to hug them to your chest and not let go until the fullness in your heart subsides. 'Small in the City', a work of surpassing poignancy and understanding by Canadian author-illustrator Sydney Smith, is one of them."—The Wall Street Journal

"'Small in the City' is full of faith and compassion, and gorgeous to look at, as well."—The Washington Post

★ "Young readers will feel their hearts constrict, as they all know what it's like to confront a towering, intimidating world. . . . Extraordinary, emotional, and beautifully rendered." —Kirkus Reviews, Starred Review

★ "This emotionally resonant ode to the resilience of small creatures in a big, loud world is tender and timeless—and a masterful merging of art and text."—The Horn Book, Starred Review

★ "Smith's art has been award winning, but here he becomes author as well as illustrator. He does both titles proud in this stirring piece."—Booklist, Starred Review

★ "Small in the City is an unusual, useful parable, offering hope and reassurance for any young reader in the midst of a worrisome or frightening situation, whether it's a missing pet or something else―or simply life itself."—BookPage, Starred Review

★ "The atmosphere will draw listeners in immediately . . . "—The Bulletin of the Center for Children's Books, Starred Review

★ "Smith's understated portrait of longing for the return of a beloved family member takes readers on a quiet but powerful emotional journey . . ."—Publishers Weekly, Starred Review

★ "the images do most of the talking. They range from modest vignettes of city life--a portion of wire fencing, a swatch of building--to showstoppers including a fractured illustration of the downcast boy's funhouse-like reflection in a mirrored-glass skyscraper. . . . heartrending."—Shelf Awareness, Starred Review

"[W]ith evocative ink-lined cityscapes, Smith presents a matter-of-fact monologue — that of a determined boy on a search and rescue, calmly warning of the scary sights and sounds of snowy streets. But who is lost? In this wondrous ode to devotion and optimism, visual and verbal clues help solve that mystery. Bottom line: A cold day is warmed by one child’s love."—The San Francisco Chronicle

Sydney Smith is an illustrator of picture books whose work includes The White Cat and the Monk by Jo Ellen Bogart; Smoot, A Rebellious Shadow by Michelle Cuevas; Sidewalk Flowers by JonArno Lawson; and Town Is By the Sea by Joanne Schwartz, which was awarded the 2018 Kate Greenaway Medal. His accolades include two Governor General's Awards for Illustrated Children's Books and four New York Times Best Illustrated Children's Book of the Year citations. He lives in Toronto, Canada.
Loading...
or support indie stores by buying on