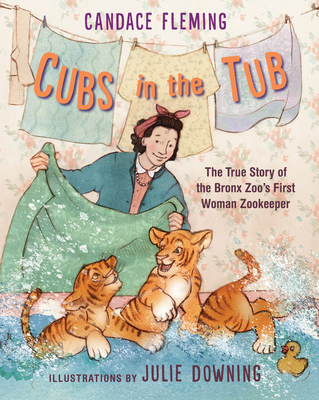 Cubs in the Tub

The True Story of the Bronx Zoo's First Woman Zookeeper

Fred and Helen Martini longed for a baby, and they ended up with dozens of lion and tiger cubs! Snuggle up to this purr-fect read aloud about the Bronx Zoo's first female zoo-keeper.

When Bronx Zoo-keeper Fred brought home a lion cub, Helen Martini instantly embraced it. The cub's mother lost the instinct to care for him. "Just do for him what you would do with a human baby," Fred suggested...and she did. Helen named him MacArthur, and fed him milk from a bottle and cooed him to sleep in a crib.

Soon enough, MacArthur was not the only cub bathed in the tub! The couple continues to raise lion and tiger cubs as their own, until they are old enough to return them to zoos. Helen becomes the first female zookeeper at the Bronx zoo, the keeper of the nursery.

This is a terrific non-fiction book to read aloud while snuggling up with your cubs! Filled with adorable baby cats, this is a story about love, dedication, and a new kind of family.

Backmatter includes a short biography of Helen Martini and a selected bibliography.

Praise For Cubs in the Tub: The True Story of the Bronx Zoo's First Woman Zookeeper…

★ "A charming reflection of courage and change."—Booklist, Starred Review

★ "Warm, retro cartoon art captures all the adorable and humorous antics of baby animals as Helen undertakes fostering first the lion cub and then, later, four tiger cubs. The art makes it easy to forget the wild nature of these giant cats who like to snuggle and sit in laps, and the interplay between the pictures and the lively text creates a heartwarming and upbeat atmosphere."—The Horn Book, Starred Review

"The charming saga of Helen’s journey from a homemaker to a pioneering zookeeper is narrated in well-written, accessible prose. . . . Charming and adorable"—School Library Journal

"The account of romping around an apartment with adorable and affectionate baby big cats will make young audiences purr with joy (and a little envy). Line and watercolor art is cuddly and cozy, with drab wartime colors and lots of period hats in the crowds; the illustrations give the animals plenty of cuteness without overdoing it, keeping Helen Martini’s role front and center."—Bulletin of the Center for Children's Books

"Telling the tale with great attention to detail, Fleming perfectly captures both time and place as well as the loving, determined woman who forged her way in a man’s profession. Downing’s illustrations in a wide variety of sizes and hues will keep readers’ attention glued to the pages and are in sync with the text in every way. . . . A lovely homage to a little-known woman and her quiet achievement."—Kirkus Reviews

"There's a fairy tale quality to Fleming's story of Helen Martini, a woman whose longing for a baby was filled by raising a series of orphaned big cat cubs, which unexpectedly led to her becoming the first female zookeeper at the Bronx Zoo. . . . Downing’s sensitive illustrations shine in a rich, muted palette, using sweeping lines and patterned details to conjure cozy, 1940s-era domestic scenes where lions snooze on laps and tigers frolic in bubble baths." —Publishers Weekly

Candace Fleming is the author of more than twenty distinguished books for children including The Family Romanov: Murder, Rebellion, and the Fall of Imperial Russia, winner of, among other awards, the Boston Globe-Horn Book Award for Nonfiction. She received the NCTE Orbus Pictus Award and a Sibert Honor for Giant Squid. Her most recent book with Holiday House is Honeybee. She lives in Chicago.

Julie Downing has illustrated over forty-five picture books including The Fire Keeper's Son, Tessa Takes Wing and First Mothers. She has won many awards including a Parents Choice Award, the New York Public Library's Best Books Award, APAAL Best Illustrated Book and the Irma Black Silver Medal. Her work has been featured in the SCBWI Original Art Show.
Julie teaches illustration to undergraduate and graduate students at the Academy of Art University. She lives in San Francisco.
Loading...
or support indie stores by buying on