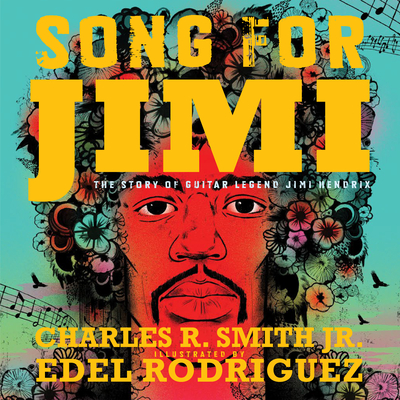 Jimi Hendrix's talent was epic, and so is this lyrical account of his life, with spectacular artwork by Edel Rodriguez-- including a poster underneath the jacket!

From his turbulent childhood through his epical appearance at the Monterey and Woodstock festivals, Charles R. Smith Jr. covers it all in this rich and rhythmic account of a singular life, accompanied by the psychedelic splendor of Edel Rodriguez's acid-tinged artwork.

Let me tell you a story,
a story 'bout a boy,
who became a man,
a git-tar man,
named Jimi.

Written as a series of verses beginning with intro and ending with outro, this unique mix of rhythm and rhyme captures the essence of rock icon Jimi Hendrix and his struggle to live life on his own terms.

Backmatter, including a select discography, timeline of Hendrix's life, and a personal essay from the author, is included.

Praise For Song for Jimi: The Story of Guitar Legend Jimi Hendrix…

"Using flashy colors and explosive compositions, Rodriguez creates a set of poster-style illustrations that give this tribute to legendary "git-tar man" Jimi Hendrix both an evocative urgency and a strong period flavor."—Booklist

"Bursts with psychedelic color and rhythmic verse. . .  Free verse structured like one long song with repeating motifs is an effective choice for conveying Hendrix’s creative and musical journey. . . . Music radiates from Jimi in swirls, rays, and zig-zags, and he is rendered in a different dynamic pose on each page."—School Library Journal

"Smith casts his narration in free verse rhythms reflective of Hendrix’s musical. . . . Rodriguez tracks Hendrix through a vibrant visual age progression that will engross readers with the revolving door of looks. . . ." —The Bulletin of the Center for Children's Books

"Hendrix fans young and old will appreciate this look at how 'Jimi showed the world/ how to kiss the sky.'"—Publishers Weekly

Charles R. Smith Jr. is an award-winning children's book author, photographer and poet with over thirty books to his credit. His awards include a Coretta Scott King Award for Illustration for his photographs accompanying the Langston Hughes poem, My People and a Coretta Scott King Honor Author Award for his biography on Muhammad Ali, Twelve Rounds to Glory. He lives in Poughkeepsie, New York.

Edel Rodriguez was born in Havana, Cuba. He has received the Gold Medal from the Society of Illustrators and for many years was the art director of Time Magazine. Books he has illustrated include Mama Does the Mambo, by Katherine Leiner, and Float Like a Butterfly, by Ntozake Shange. Edel lives in New Jersey with his wife and daughter.
Loading...
or support indie stores by buying on