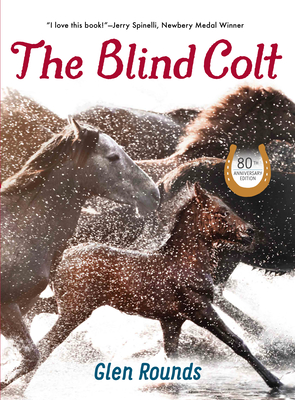 Can a young blind horse survive in the badlands of Montana? Find out in this beautiful new edition of a classic American tale.

Now celebrating its 80th anniversary with beautifully redesigned new edition featuring lots of extras, The Blind Colt is a timeless tale of survival and friendship. This classic volume now features an appreciation by Matt Myers, a piece from author Glen Rounds on his inspiration for the story, and facts and resources about wild mustangs today.

In the badlands, where the ground is soft but the slopes are steep and the vegetation is scarce, it can be difficult for a wild horse to survive. Even more so if that horse is blind. But this young colt has his strong mare of a mother looking out for him, and his other senses help him smell the friendly prairie dogs, feel for rough terrain, and hear whenever wolves draw near-- sometimes well before anyone else in his herd.

That's not all. A boy named Whitey, about ten years old, and his ranch-owning Uncle Torwal watch from the sidelines whenever the colt and his herd pass through the plains near their home. Whitey, especially, hopes the young colt grows strong, just as he hopes they might get a chance to meet someday. And when a rough winter starts to settle in, he might just get his wish.

This classic of children's literature in the tradition of War Horse, The Black Stallion, and Misty of Chincoteague comes from one of America's master storytellers. Glen Rounds grew up in the Dakota badlands, and drew from details from his own life on a ranch to depict one little colt's struggle to make it through the winter.

"Rounds's eloquent prose paints a vivid picture of life on the prairie ('The tumbleweeds to him were rattly rustlings and soft, ploppy swishes as they rolled and bounced'), and his rough pen-and-ink drawings complement the descriptions of the untamed environment, where the young colt must rely on senses other than sight to survive . . ." —The Horn Book

Glen Rounds (1906-2002) was born in a sod house in South Dakota and travelled by covered wagon to the Montana badlands, where he lived on the kind of ranch depicted in The Blind Colt. As a young man, Rounds studied at the Art Students League in New York City, becoming friends with Jackson Pollock, with whom he spent a summer travelling the countryside. Later, with his gift for storytelling, Rounds published his first book, Ol' Paul, a collection of tall tales influenced by the stories of Paul Bunyan. Rounds continued to write and draw for 60 years, even learning to draw left handed when arthritis crippled his right arm. Some of his best known books are Cowboys, Three Billy Goats Gruff, and Sod Houses on the Great Plains.
Loading...
or support indie stores by buying on