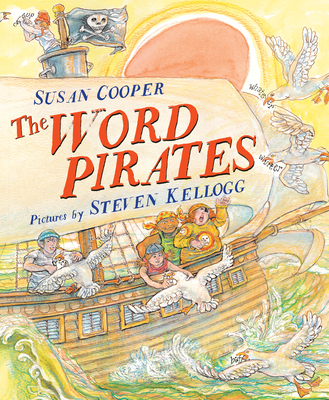 A ravenous band of pirates who eat words for breakfast gobble up the world's greatest stories. But never fear--the Word Wizard and the children she reads to are on the case!

Pirate Captain Rottingbones and his crew need breakfast. But these pirates can't have just any ordinary breakfast...no, they need nice, fresh WORDS. And where better to get them than stealing them straight off the pages of all kinds of books?

But when Captain Rottingbones and his cronies go after the Word Wizard and her extra delicious words that they steal from her extra juicy stories, they've finally gone too far...because not only does the Word Wizard believe words are precious things that belong in stories, but she also has a weapon stronger than any sword--a mighty pen.

Susan Cooper, author of the acclaimed Dark Is Rising fantasy series, teams up with renowned illustrator Steven Kellogg to create a swashbuckling adventure that celebrates the power of reading.

A Bank Street Best Book of the Year

Praise For The Word Pirates…

"Cooper’s words are deliciously funny, and have several important messages to share about the value of stories. . . . Kellogg’s comical style perfectly complement’s Cooper’s flair. With the storyteller tone, lush palette, and oddball characters, they have created a whimsical adventure where a Word Wizard, and the children, are the heroes. Two prominent creators of children’s literature have combined their powers to deliver a memorably funny tale about the value of stories. For its potential to create future readers, this book is invaluable."—School Library Journal

"Kellogg's signature art overflows with the color, movement, and expression of a vintage carnival poster."—Publishers Weekly

"Hungry pirates are nothing to mess with under ordinary circumstances, and these buccaneers are absolutely not ordinary. . . . A right jolly paean to the deliciousness of words."—Kirkus Reviews

Newbery Medalist Susan Cooper is the author of the classic fantasy series The Dark Is Rising, as well as many other works for children, including the picture books The Magician's Boy, Tam Lin, and Frog. Born in England to Welsh parents, she now lives in Marshfield, Massachusetts. She is a recipient of the Margaret A. Edwards Award for lifetime achievement from the American Library Association.

Steven Kellogg is a revered author and illustrator who has written and/or illustrated almost 100 children's books, including the Pinkerton series and How Much Is a Million?. A recipient of an honorary doctor of letters from the University of Findlay, he lives in Essex, New York.
Loading...
or support indie stores by buying on
(This book is on backorder)