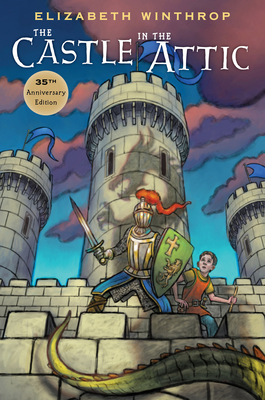 The Castle in the Attic (35th Anniversary Edition)

The classic children's story about a young boy, his toy castle, and a magical adventure that reveals the true meaning of courage—now in a stunning anniversary edition

When his beloved caretaker Mrs. Phillips tells him she's leaving, William is devastated. Not even her farewell gift of a model medieval castle helps him feel better—though he has to admit it's fascinating. From the working drawbridge and portcullis to the fully-furnished rooms, it's perfect in every detail. It almost seems magical.

And when William looks at the silver knight, the tiny figure comes to life in his hand—and tells him a tale of a wicked sorcerer, a vicious dragon, and a kingdom in need of a hero. Hoping the castle's magic will help him find a way to make his friend stay, William embarks on a daring quest with Sir Simon, the Silver Knight—but he will have to face his own doubts and regrets if he's going to succeed.

A reader favorite for 35 years, this redesigned anniversary edition includes an author's note from Elizabeth Winthrop, reflecting on the novel and its legacy.

William's story continues in The Battle for the Castle, available as a redesigned companion edition.

Praise For The Castle in the Attic (35th Anniversary Edition)…

"An absorbing fantasy . . . suspense and colorful details, as well as a gentle moral precept, make the story special."—Publishers Weekly

"A satisfying quest fantasy with a strong element of modern realism which will appeal to a wide range of readers."—School Library Journal

Elizabeth Winthrop is the author of more than sixty books, most of them for children. Her best-known work is The Castle in the Attic, which was nominated for twenty-three state awards and won the won the Dorothy Canfield Fisher Children's Book Award, the California Young Reader's Medal, and was named a Children's Choice by the International Reading Association. A great-grandniece of Theodore Roosevelt, Elizabeth lives in New York City.
Loading...
or support indie stores by buying on