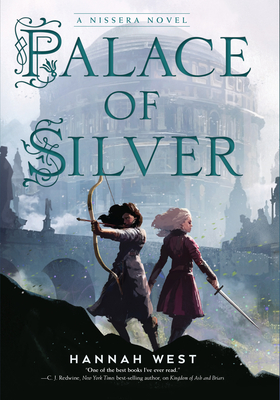 Two queens confront the ultimate choice as a rebellion emerges against a dangerous despot - and both sides want them dead. When the world of magic is under threat, is loyalty worth their lives? Wickedness awaits in this exhilarating installment in the acclaimed Nissera Chronicles.

But there's a fourth queen in charge: Ambrosine, banished overseas to Perispos. Driven by vanity, she vows to become the most powerful and beautiful ruler in the world, even if it means oppressing the mortal kingdom she is meant to protect. Meanwhile a dangerous uprising led by elicromancer-hating rebels gains momentum. Rot spreads through the Forest of the West Fringe. Valory goes missing. Facing enemies on all sides, Glisette and Kadri must reckon with the role of magic. How far will they go to defend their power - and can they build an uprising of their own?

West intertwines homages to Snow White and Bluebeard with her imaginative magical setting for a breathtaking follow-up to Realm of Ruins. Stunning hardcover edition includes a two-page map and family tree.

Praise For Palace of Silver: A Nissera Novel (The Nissera Chronicles #3)…

"Being a queen was never going to be easy . . . West continues to skillfully grow her original fantasy fairy tale"—Booklist

"Fans will enjoy seeing more of the world through complex, interwoven plots."—Kirkus Reviews

Hannah West is a freelance writer with a French degree she wishes she had more occasion to use. Her debut novel, Kingdom of Ash and Briars, received a starred review from Kirkus Reviews and was named a Kirkus Best Book of the Year. She lives in Texas with her husband and their two rambunctious rescue dogs. Find her at hannahwestauthor.com or on Instagram @hannahwestya.
or support indie stores by buying on