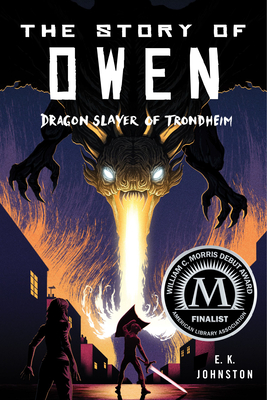 The Story of Owen

Dragons. In modern day North America. How can sixteen-year-old Owen fight back when he can barely pass algebra? It takes a village to train a dragon slayer, and Owen needs all the help he can get.

Owen is destined by birth to carry on his family's legacy as a noble dragon slayer. Siobhan, his classmate and new friend, agrees to be Owen's bard, slated to tell his stories for posterity. Together they embark on an epic quest to protect their rural Canadian town from dragons who hunger for fossil fuels. For in this wildly creative alternate version of our world, dragons feed on carbon emissions, and they'll take down any human who stands in their way.

Owen and Siobhan have homework to do, instruments to practice, and college to think of, but their most important job is to keep the residents of Trondheim, Ontario, from getting caught in the dragons' cross fire. Literally.

Fans of M.T. Anderson and readers who love contemporary fantasy, alternate history, and old Norse ballads will devour this clever, award-winning tale of friendship and adventure.

Praise For The Story of Owen: Dragon Slayer of Trondheim…

"Dragons are the tangible cost of industrialization in E. K. Johnston's wry young adult novel, 'The Story of Owen: Dragon Slayer of Trondheim.' . . . The promising 'Story of Owen' is a clever first step in the career of a novelist who, like her troubadour heroine, has many more songs to sing." ―The New York Times Book Review

★ "Johnston’s masterful book is a refreshing blend of alternative history, high fantasy, and contemporary teen life. Johnston has done careful research for her intricate world building, and the result is strikingly original and believable."—Booklist, Starred Review

★ "In an alternate world where humans and dragons battle over fossil fuels, the tale of one slayer and his bard becomes a celebration of friendship, family, community and calling. . . . It may '[take] a village to train a dragon slayer,' but it takes an exceptional dragon slayer to deserve a village―and a storyteller―like this one."—Kirkus Reviews, Starred Review

★ "Johnston has created a whip-smart, witty, and utterly inventive alternate history. If this stellar debut is any indication, hers looks to be a bright, long-burning career."—Quill & Quire, Starred Review

"The humour is wry, the dialogue snappy, the commentary on our obsession with fossil fuels sharp"—The Globe & Mail

"Johnston focuses on developing rich characters and a detailed alternate history, with mild dragon encounters sprinkled throughout. Readers who enjoy world-building will enjoy the attention Johnston gives to infusing history and contemporary life with dragons."―VOYA

"An interesting commentary on the perils of carbon emissions, action, interesting twists on history, and themes of friendship, family, loyalty, and sacrifice will keep readers turning pages."―Library Media Connection

E. K. Johnston is the #1 New York Times best-selling author of several YA novels, including Star Wars: Ahsoka and A Thousand Nights. She is also a trained forensic archaeologist, has lived on four continents, and decorates cupcakes in her spare time. These days, she calls Stratford, Ontario, home.
Loading...
or support indie stores by buying on