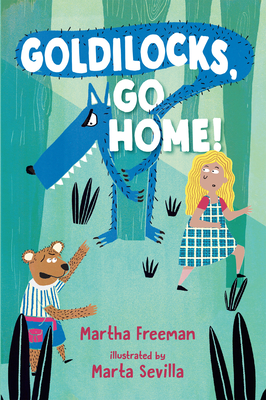 Prepare to laugh out loud at the antics of Goldilocks and The Three Bears in this illustrated chapter book for lovers of snarky humor and fractured fairy tales.

"So I ate some porridge and broke a chair--get over it!" Goldilocks snipes at Bobby Bear, as Baby Bear is now calling himself. Tensions are high at the Three Bears cottage where Goldilocks--an overdramatic tween who has deluded herself into believing she's a princess--is stranded until the Big Bad Wolf vacates the area. A hungry troll, three pigs with a home improvement show on HoGTV, and of course the Big Bad Wolf all figure into the story in this hilarious mash-up of folk and fairy tales from around the world.

In chapters full of quirky and clever drawings, Bobby and Goldilocks alternate narrating the story of their hair-raising adventures. But despite their initial bad impressions, a kind of affection develops between Bobby and Goldilocks, and they become something like friends. As Bobby explains, "I mean, annoying as she was, I didn't want her to end up wolf kibble." Over 80 illustrations are included.

"this mixed-up story is a new take on the classic fairy tale."—Kirkus Reviews

"The real treat here is the fairy tale forest and its various nods to classic stories: the three little pigs have their own home improvement show on HoGTV, Mulan teaches kung fu lessons, and Scheherazade leads the library’s storytime. . . . Sevilla’s cartoonishly stylish black and white illustrations add a modern flair to classic references." —Bulletin of the Center for Children's Books


"Irreverently told from Bobby’s and Goldilocks’s alternating viewpoints, the story moves quickly and will be particularly appreciated by fans of other fairy-tale reimaginings . . . Independent readers who like their fairy-tale fun with a dash of sass will be pleased by Freeman’s new offering."—School Library Journal

"Chapter narration switches between Goldilocks and Bobby, with each butting into the other’s chapter via debut illustrator Sevilla’s lively cartoons and amusing commentary. Clever references to other fairy tales and modern twists, as when Goldilocks inspires Mama Bear to get Papa and Bobby to do more housework, further enhance this delightful romp."—Publishers Weekly

Martha Freeman has written fiction for children of all ages, including The First Kids Mysteries, The Chickadee Court Mysteries, and Strudel's Forever Home. She lives in Philadelphia, Pennsylvania.

Marta Sevilla is an exciting young artist whose work has appeared in newspapers and magazines in both North America and Europe, including the Washington Post and the Boston Globe. She lives in Spain.
Loading...
or
Not Currently Available for Direct Purchase