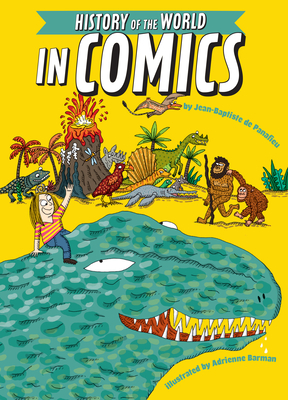 The History of the World in Comics

Never has natural history been so fun! Scientific accuracy and humor combine to tell the entire history of Earth in a comic book format.

A paleontologist and a storyteller take two children through the birth of our planet, the beginning of microbes, and through the heydays of protozoans, dinosaurs, and early mammals with unfailing enthusiasm.

The art accurately portrays animal species and prehistoric landscapes, includes maps and infographics, but also adds humorous touches: a google-eyed prehistoric fish looking startled to be walking on land and the children popping out of a tree top to surprise a Brachiosaurus.

The combined expertise of author Jean-Baptiste de Panafieu, a science writer and biologist, and illustrator Adriene Barman, the creator behind Creaturepedia and Plantopedia, makes for a science read you can trust.

Fans of Maris Wicks's Human Body Theater and Nathan Hale will be pleased.

Praise For The History of the World in Comics…

★ "This is a satisfyingly detailed romp, with plenty of minutiae for those who demand it, but broad enough for pleasure reading. The density of the material is tempered by Barman’s detailed but peppy color-saturated cartoons."—School Library Journal, Starred Review

"A visual history of our planet’s long career as a nursery for living things."—Kirkus Reviews


"With witty tour guides and striking visuals, this tour of, well, just about everything details the 'long, beautiful trip' from the birth of the planet to the present day. The evolution of life, full of pincers, jaws, feet and feathers, is the subject of most of the book — including the 'furballs' who were the distant ancestors of humanity. But 'comic' doesn’t mean unscientific — and the book takes care to explain the science behind, for instance, the giraffe’s long neck, and to debunk popular misunderstandings. What will the future bring? The book pulls no punches about the impact of humans on the world, but opens the door to wonder about what we have yet to discover (on Earth and beyond) and how we might continue to evolve."—The Virginian Pilot

"The comic-panel illustrations are relatively uncluttered and easy to follow. Because humans are such a recent presence (evolutionarily speaking), most of the book's discussion focuses on events from 4.6 billion to twelve thousand years ago--giving readers a good sense of the scale of time (a 'geologic time scale' is helpful)."—The Horn Book

Jean-Baptiste de Panafieu is a science writer and biologist with advanced degrees in genetics, oceanography, and cinematography. He is well-known in France for his television documentaries and books on science for both children and general audiences. He has won the Prix La Science se Livre and the Prix du Livre Scientifique in France. His Evolution created with the Museum of Natural History in Paris was published in the U.S. by Seven Stories Press. He lives in Paris, France.

Adriene Barman is a Swiss graphic novelist, designer, and illustrator. She specializes in inventive books on animals for children. Her popular Creaturpedia and its companion Plantopedia have been published throughout the world, and by Wide Eyed Editions in the U.S. She lives in Geneva, Switzerland.
Loading...
or support indie stores by buying on
(This book is on backorder)