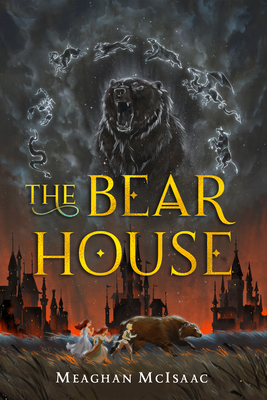 In a gritty medieval world where the ruling houses are based on the constellations, betrayal, intrigue, and a king's murder force the royal sisters of the Bear House on the run!

Moody Aster and her spoiled sister Ursula are the daughters of Jasper Lourdes, Major of Bears and lord of all the realm. Rivals, both girls dream of becoming the Bear queen someday, although neither really deserve to, having no particular talent in... well, anything.

But when their Uncle Bram murders their father in a bid for the crown, the girls are forced onto the run, along with lowly Dev the Bearkeeper and the Lourdes's half-grown grizzly Alcor, symbol of their house. As a bitter struggle for the throne consumes the kingdom in civil war, the sisters must rely on Dev, the bear cub, and each other to survive--and find wells of courage, cunning, and skill they never knew they had.

"The stellar worldbuilding is both expansive and accessible, and the action never falters. . . . Thrilling adventure set in an enchanting world makes this an easy pick for high fantasy fans."—Kirkus Reviews

Meaghan McIsaac is the author of several books for young readers, including The Boys of Fire and Ash, which was shortlisted for the Manitoba Young Readers' Choice Award; and Movers, which was a Shining Willow Finalist for the Saskatchewan Young Readers' Choice Awards. Meaghan lives in Toronto, Ontario with her two dogs.
Loading...
or support indie stores by buying on