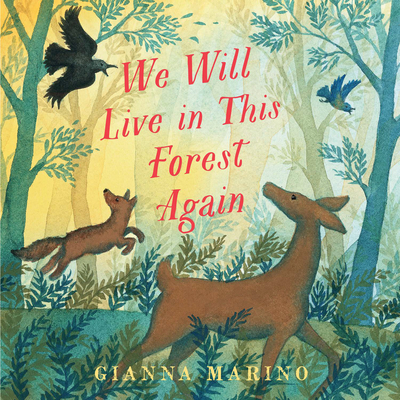 We Will Live in This Forest Again

When wildfires consume their forest home, the animals must flee--but as the flames subside, they return and look to new beginnings . . .

At first, they didn't notice the spark flying above the dry treetops.

But then the smoke blew from the north, and the flames began to grow. . .

This story of recovery and resilience will comfort young readers concerned about forest fires, reassuring them that in time new growth will sprout and, like the wildlife in the story, we can rebuild.

Lush watercolor illustrations explore the bittersweet cycle of burning and rebirth in the forest, following a lone deer as it sees its only home scorched by flame--and later, returns to find new plants already sprouting, the promise of a day when the air will be filled with birdsong once again.

As a Northern California resident, Gianna Marino witnessed the 2017 Sonoma wildfire firsthand when it came within inches of destroying her property. Her personal experience is palpably reflected through her portrayal of dignified animal silhouettes and stark, ashen landscapes in the wake of the flames. The book closes with an essay describing her encounter with the wildfire. Accessible information on wildfires, including a list of recommendations for further reading, is also included.

Fans of Chelsea Clinton's Don't Let Them Disappear will recognize Gianna's distinctive, beautiful art and appreciate the hopeful ecological message of We Will Live in This Forest Again. Parents and children with a soft spot for the fragile ecology of the forest will connect immediately with this book, and gain appreciation for what it takes to protect the natural world.

Praise For We Will Live in This Forest Again…

★ "The poetic text is powerful and effective at building tension and then providing hope. The color palette perfectly conjures the before, during, and after of the fire while Marino’s lyrical text from the deer’s view point gives it context. It is a potent combination." —School Library Journal, Starred Review

★ "Marino’s story poignantly describes a forest fire from the perspective of a deer living in the woodlands. . . . As the pages turn, evocative gouache paintings silhouetting animals and tangled tree branches shift movingly in hue from green to orange to charred black, then to the cooling blue of rain and the green of new growth. The author’s afterword shares her experiences with wildfires alongside wildfire facts."—Publishers Weekly, Starred Review

★ "Inspired by her own experiences in the 2017 fires in California, Marino tells this story in the nostalgic but also hopeful voice of one of the forest-dwellers . . . These double-page spreads have the translucence of watercolors and constantly change colors. The yellows and greens of the forest are overtaken by fiery reds and oranges, which turn to sooty gray, then warm brown, with, finally, shoots of green. Reassurance about the resilience of the natural world."—Kirkus Reviews, Starred Review

★ "Marino’s strong yet delicate paintings feature overlapping layers of luminous colors: tranquil blues and greens at the beginning, yellows and flaming reds when the fire takes hold, brownish grays and black afterwards, and in the future, greens and blues again. Creating a mood as well as telling a story, the writing is spare, precise, and evocative." —Booklist, Starred Review

Gianna Marino has written and illustrated numerous articles for travel and leisure magazines. Her children's books include Zoopa: An Animal Alphabet, One Too Many, Meet Me at the Moon, Too Tall Houses, Following Papa's Song, and If I Had a Horse. She also created the illustrations for Chelsea Clinton's Don't Let Them Disappear. Though she still wanders the world, Gianna now lives in Northern California and works full-time writing and illustrating.
Loading...
or support indie stores by buying on