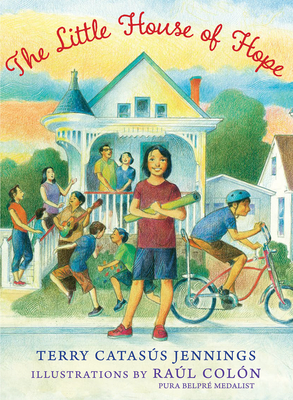 The Little House of Hope

When Esperanza and her family arrive in the United States from Cuba, they rent a little house, una casita. It may be small, but they soon prove that there’s room enough to share with a whole community.

“It was a little house. Una casita . . .
It was small.
It smelled like old wet socks. . .
But even though they were far from home,
The family was together.”


As Esperanza and her family settle into their new house, they all do their part to make it a home. When other immigrant families need a place to stay, it seems only natural for the family in la casita to help. Together they turn the house into a place where other new immigrants can help one another. Esperanza is always the first to welcome them to la casita. It’s a safe place in a new land.

Terry Catasus Jennings first came from Cuba to the U.S. in 1961, when she was twelve years old. With The Little House of Hope, she tells an inspiring, semi-autobiographical story of how immigrants can help each other find their footing in a new country.

Praise For The Little House of Hope…

"In an ­economical and sensory-rich text, Jennings describes the family's new life in the U.S. . . . Colón's (Imagine!, rev. 9/18) signature crosshatched drawings bring out the house's character. His watercolor and colored-pencil illustrations in a palette of muted greens, blues, and oranges show the many roles la casita plays as it evolves, expanding to become a haven for hope."—The Horn Book

"Beautifully illustrated using Colón’s trademark scratched-watercolor technique, this book tells the story of many a refugee family and humanizes a group of people often othered. In an age-appropriate way, it touches on the complicated reasons people leave their homes. . . . this inspiring tale offers a lot of hope."—Kirkus Reviews

"A valuable story about the importance of generosity and community."—Booklist

Terry Catasús Jennings and her family emigrated from Cuba in 1961. The Little House of Hope is inspired by her own experience. She is the author of the Definitely Dominguita chapter book series, The Women's Liberation Movement, 1960-1990, and Pauli Murray: The Life of a Pioneering Feminist and Civil Rights Activist. Her articles have appeared in The Washington Post, Newsday, and Ranger Rick. She is also an active member of The Children's Book Guild of Washington, DC and SCBWI. Terry lives with her husband in Northern Virginia.


Raúl Colón is the recipient of the 2021 Eric Carle Honor. He is the award-winning illustrator of many picture books, including Draw! an ALA Notable Book and recipient of the International Latino Book Award; Jill Biden’s Don’t Forget, God Bless Our Troops; Imagine! an ALA Notable Book, a New York Public Library Best Book for Kids, and a Bookpage Best Book; Susanna Reich’s José! Born to Dance; and Angela’s Christmas by Frank McCourt. Mr. Colón lived in Puerto Rico as a young boy and now resides in New City, New York, with his family.
Loading...
or support indie stores by buying on