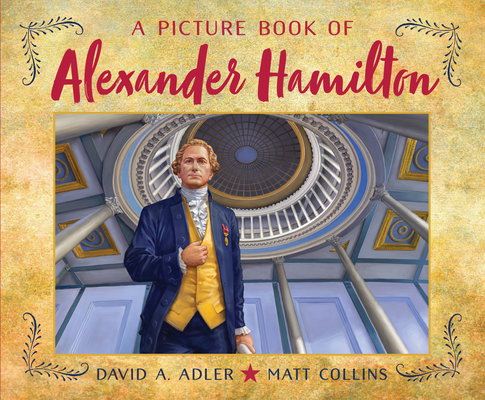 How an extraordinary patriot made soaring accomplishments but then met a devastating end, the life of Alexander Hamilton for picture book readers.

David A. Adler is a former math teacher and author of more than two hundred picture books, biographies, and mysteries for children, including the Cam Jansen series and his Picture Book Biography Of... series. His many celebrated history books include Heroes of the Revolution, A Picture Book of Alexander Hamilton, Harriet Tubman and the Underground Railroad, and A Picture Book Of Benjamin Franklin.

Matt Collins has illustrated numerous picture books for children. Publishers Weekly praised his "dynamic" and "painterly" illustrations for Basketball Belles, and in a starred review, Booklist lauded the art's "clever details that contribute to the you-are-there feeling." He lives in Connecticut.

"This picture book biography describes Alexander Hamilton’s childhood, his role in the American Revolution, and his death by dueling with Aaron Burr. Adler also explains Hamilton’s role in the newly formed government as the Secretary of the Treasury. The colorful and expressive illustrations add visual context for the defining scenes in Hamilton’s life. . . . Readers looking for a short biography of Alexander Hamilton will appreciate this engaging work."—School Library Journal
or
Pre-Order Now
Copyright © 2020 American Booksellers Association