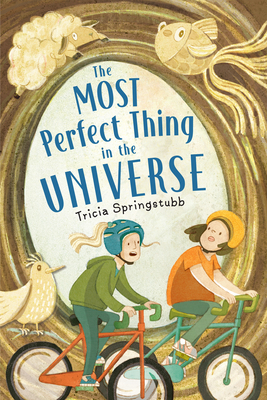 The Most Perfect Thing in the Universe

For fans of Shouting at the Rain by Lynda Mullaly and The Adventures of a Girl Called Bicycle by Christina Uss, a novel about one unadventurous girl who discovers she is anything but.

Eleven-year-old Loah Londonderry is definitely a homebody. While her mother, a noted ornithologist, works to save the endangered birds of the shrinking Arctic tundra, Loah anxiously counts the days till her return home. But then, to Loah's surprise and dismay, Dr. Londonderry decides to set off on a perilous solo quest to find the Loah bird, long believed extinct. Does her mother care more deeply about Loah the bird than Loah her daughter?

Things get worse yet when Loah's elderly caretakers fall ill and she finds herself all alone except for her friend Ellis. Ellis has big problems of her own, but she believes in Loah. She's certain Loah has strengths that are hidden yet wonderful, like the golden feather tucked away on her namesake bird's wing. When Dr. Londonderry's expedition goes terribly wrong, Loah needs to discover for herself whether she has the courage and heart to find help for her mother, lost at the top of the world.

Beautifully written, The Most Perfect Thing in the Universe is about expeditions big and small, about creatures who defy gravity and those of us who are bound by it.

Praise For The Most Perfect Thing in the Universe…

"Ms. Springstubb brings a light, deft touch to this sensitive novel that, like its protagonist, draws inspiration from the lives and ways of birds."—The Wall Street Journal

★ "there is plenty to keep readers engaged in this heartfelt exploration of goodness. . . . Satisfying and life affirming: a perfect thing in the universe of juvenile fiction."—Kirkus Reviews, Starred Review

"Readers will cheer as Loah steps up and makes things happen, with the help of some unexpected friends. It’s a sweet, satisfying story full of heart—and fascinating facts about birds, climate change, and the environment. . . . An excellent choice for fans of realistic fiction and readers interested in nature."—School Library Journal

"The Most Perfect Thing in the Universe is an appealing coming-of-age story with broad emotional range. Author Tricia Springstubb writes with a deft hand, and her moving and complex third-person narration contains frequent humorous asides to the reader."—BookPage

"From Loah to her caretakers to her only friend, the characters have convincing backstories that shed light on their idiosyncrasies. The well-paced story, enhanced with avian information and enchantment, builds in intensity as Loa becomes more isolated and self-reliant, yet increasingly focused on others. The novel concludes in a heartening, wholly satisfying way, suitably accompanied by birdsong." —Booklist

"The authentic and compelling narrative sings with avian metaphors as Springstubb plays with language. . . ."—The Horn Book

"The third-person narration manages both compassion and cleverness with direct addresses to the reader that oscillate in tone between thoughtfully poignant and drolly amused. . . . The book makes clear the distinction between loving someone and caring for them, and both Loah’s and Ellis’ experiences convey how painful the absence of either can be."—The Bulletin of the Center for Children’s Books

Tricia Springstubb has written many well-reviewed books for young readers, including What Happened on Fox Street, which was an Indie Pick, and Every Single Second which received starred reviews from Publishers Weekly and Kirkus Reviews. She lives in Cleveland Heights, Ohio.
Loading...
or support indie stores by buying on