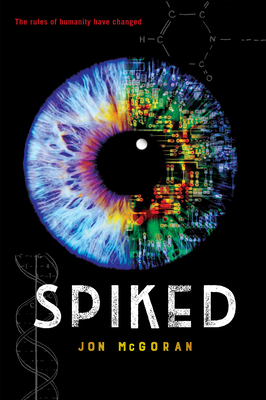 A plan for peace turns into a fight for survival in the third book of the acclaimed sci-fi thriller series.

Committed to both peace and human rights for chimeras--people who alter themselves with animal DNA--seventeen-year-old Jimi Corcoran is torn when she's invited to a gathering of moderate pro- and anti-chimera rights activists seeking to find common ground. But when a militant chimera rights group prevents her from attending--and saves her from being killed by the bomb they've planted--Jimi herself falls under suspicion for the blast.

Seeking to clear her name, Jimi and her chimera boyfriend, Rex, investigate the mysterious group. . . . only to discover that her involvement is no accident. As they dig deeper, they're drawn into a whirlwind of secret identities, shocking experiments, and an apocalyptic plot that threatens the future of humanity.

In this thrilling conclusion to Jon McGoran's timely and heavy-hitting Spliced series, extremists on both sides square off in an escalating battle between competing visions of the future of humanity, and of the Earth. Set in a near-future society where science is both celebrated and vilified, the Spliced series tackles weighty questions about genetic manipulation, artificial intelligence, population control--and when, if ever, revolution is worth a life.

"The thrilling conclusion to the Spliced trilogy kicks off with a bang . . . . this novel profits from an intriguing near-future world, unpredictable nonstop action, and complex ethical decision-making relevant to our own ecological and political climate."—Booklist

"This novel effortlessly mixes science fiction elements into a timely story that will resonate with readers without being overly didactic. A thrilling conclusion." —School Library Journal

Jon McGoran writes thrillers for teens and adults. His first YA book, Spliced, was named an ALA LITA Excellence in Young Adult Science Fiction Notable Book. He lives in Pennsylvania with his family, where he is a founding member of The Liars Club for writers (liarsclubphilly.com) and cohosts the Liars Club podcast. Learn more at jonmcgoran.com or connect on Twitter and Instagram @jonmcgoran.
Loading...
or support indie stores by buying on