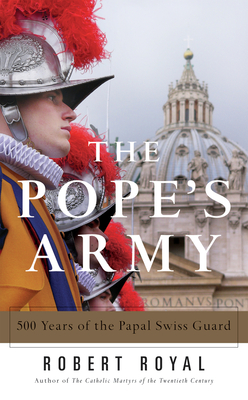 500 Years of the Papal Swiss Guard

With the recent elections of Pope Benedict XVI and Pope Francis, the world witnessed the pomp and honor of the Swiss Guard, the “Pope’s Army.” Now bestselling author Robert Royal takes us through the colorful 500-year history of the military guard that has witnessed every major Vatican event for half a millennium. Topics include the guard’s origins, the Medici Popes, the sack of Rome, the Napoleonic War, the unification of Italy, the Pope’s imprisonment; World Wars I and II; and the Nazi occupation of Rome. Perfect for those seeking a greater understanding of the Vatican's inner-workings, Robert Royal’s bestselling book on the Swiss Guard is now available in paperback.

Robert Royal is the author of The Catholic Martyrs of the Twentieth Century and Dante Alighieri. He is editor in chief of The Catholic Thing, an online publication he founded with Michael Novak; the president of the Faith and Reason Institute, based in Washington, DC; the graduate dean of Catholic Distance University; and a member of the board of directors of the Catholic Family and Human Rights Institute. He has taught at Brown University, Rhode Island College, and the Catholic University of America. He lives in Washington, DC.
Loading...
or
Not Currently Available for Direct Purchase