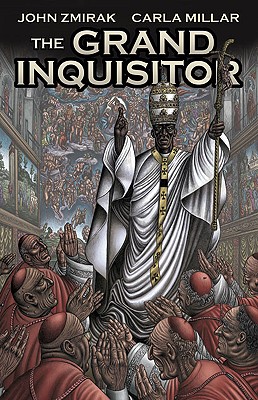 This updating of Dostoevsky’s fable will challenge believers of every hue, and fascinate students of religion, philosophy and literature. The first graphic novel written in Miltonic blank verse, is exquisitely illustrated and promises to change the genre forever.
The pope is dead. The Church is split. A rump conclave elects the first Black African pope in history, a hero who saved his people from persecution in Sudan. But a hostile cardinal kidnaps the new pope at the airport and holds him in secret at a mental hospital. To the captive, uncrowned pope "the Grand Inquisitor" lays out a dark conspiracy he has nurtured for 50 years to offer mankind salvation without the Cross. Will the new pope sign on to this "improved" version of Christianity? Will he end up dead? What obsessions join him to his enemy, and make his new vision so very tempting?

Praise For The Grand Inquisitor…

"Zmirak's work is typically . . . well, not typical. . . .  Carla Millar's illustrations bring flesh and blood to the text. The result is a sort of action movie in Miltonic verse."  —InsideCatholic.com