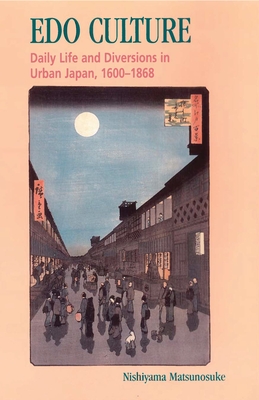 Nishiyama Matsunosuke is one of the most important historians of Tokugawa (Edo) popular culture, yet until now his work has never been translated into a Western language. Edo Culture presents a selection of Nishiyama's writings that serves not only to provide an excellent introduction to Tokugawa cultural history but also to fill many gaps in our knowledge of the daily life and diversions of the urban populace of the time. Many essays focus on the most important theme of Nishiyama's work: the seventeenth to nineteenth centuries as a time of appropriation and development of Japan's culture by its urban commoners.

In the first of three main sections, Nishiyama outlines the history of Edo (Tokyo) during the city's formative years, showing how it was shaped by the constant interaction between its warrior and commoner classes. Next, he discusses the spirit and aesthetic of the Edo native and traces the woodblock prints known as ukiyo-e to the communal activities of the city's commoners. Section two focuses on the interaction of urban and rural culture during the nineteenth century and on the unprecedented cultural diffusion that occurred with the help of itinerant performers, pilgrims, and touring actors. Among the essays is a delightful and detailed discourse on Tokugawa cuisine. The third section is dedicated to music and theatre, beginning with a study of no, which was patronized mainly by the aristocracy but surprisingly by commoners as well. In separate chapters, Nishiyama analyzes the relation of social classes to musical genres and the aesthetics of kabuki. The final chapter focuses on vaudeville houses supported by the urban masses.

Gerald Groemer is professor of Japanese and Western music history at the University of Yamanashi in Kōfu, Japan.
Loading...
or support indie stores by buying on
(This book is on backorder)