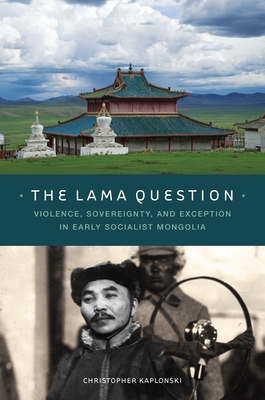 Before becoming the second socialist country in the world (after the Soviet Union) in 1921, Mongolia had been a Buddhist feudal theocracy. Combatting the influence of the dominant Buddhist establishment to win the hearts and minds of the Mongolian people was one of the most important challenges faced by the new socialist government. It would take almost a decade and a half to resolve the "lama question," and it would be answered with brutality, destruction, and mass killings. Chris Kaplonski examines this critical, violent time in the development of Mongolia as a nation-state and its ongoing struggle for independence and recognition in the twentieth century.

Unlike most studies that explore violence as the primary means by which states deal with their opponents, The Lama Question argues that the decision to resort to violence in Mongolia was not a quick one; neither was it a long-term strategy nor an out-of control escalation of orders but the outcome of a complex series of events and attempts by the government to be viewed as legitimate by the population. Kaplonski draws on a decade of research and archival resources to investigate the problematic relationships between religion and politics and geopolitics and biopolitics in early socialist Mongolia, as well as the multitude of state actions that preceded state brutality. By examining the incidents and transformations that resulted in violence and by viewing violence as a process rather than an event, his work not only challenges existing theories of political violence, but also offers another approach to the anthropology of the state. In particular, it presents an alternative model to philosopher Georgio Agamben's theory of sovereignty and the state of exception. The Lama Question will be of interest to scholars and students of violence, the state, biopolitics, Buddhism, and socialism, as well as to those interested in the history of Mongolia and Asia in general.