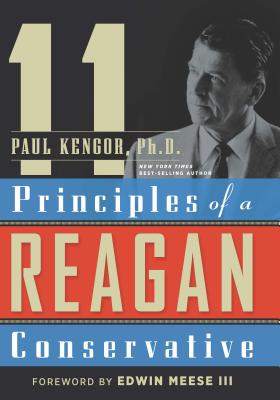 11 Principles of a Reagan Conservative

Perhaps no other president's name is invoked by politicians as much as Ronald Reagan's. Every election, as presidential hopefuls jockey for the Republican nomination, each one claims to be a Reagan conservative. But are these candidates truly carrying on the mantle of Ronald Reagan, or are they abusing the memory of our great president? What did Ronald Reagan really believe? In 11 Principles of a Reagan Conservative, biographer Paul Kengor analyzes Ronald Reagan's speeches and actions to paint a full, accurate picture of his beliefs. Kengor identifies these principles that lie at the crux of Reagan's conservatism; Freedom, Faith, Family, Sanctity and Dignity of Human Life, American Exceptionalism, The Founders' Wisdom and Vision, Lower Taxes, Limited Government, Peace Through Strength, Anti-Communism, and Belief in the Individual. And it is through these principles that Reagan's modern emulators may create a successful, conservative future.

Many a politician has asked: What would Reagan do if he were president now? Where would Reagan stand on today's issues? Who is the next Ronald Reagan? Paul Kengor dissects Reagan's presidency and provides decisive conclusions. The answers to some of these questions may surprise conservatives and liberals alike.

Dr. Paul Kengor is professor of political science at Grove City College and executive director of the college's Center for Vision & Values. Kengor is an internationally recognized authority on Ronald Reagan. Kengor is nationally known for his work on the American presidency. He is part of a select group of presidential scholars to participate in C-SPAN's highly regarded ranking of American presidents. A native of Western PA, Kengor lives in Grove City, PA, with his wife and their seven children.