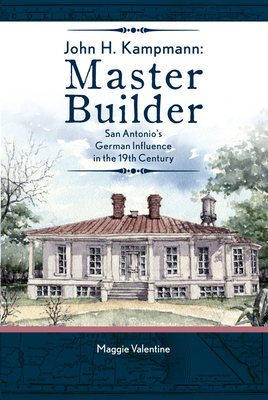 Although relatively unknown in modern day San Antonio, John H. Kampmann was an imposing force during his lifetime (1819-1885). Maggie Valentine explores the lasting legacy Kampmann had as a craftsman, builder, contractor, stonemason, construction supervisor, building designer, materials supplier, and business and civic leader for thirty-five years in San Antonio. He changed the face of the city from an adobe Spanish village to a city of stone and mortar. The book also looks at what it meant to be an architect, the business of building, and the role of immigrants. John and Caroline Bonnet Kampmann's de­scendants contributed much to the history of the city for generations. His client list reads like a Who's Who in 19th-century San An­tonio. His work included the Menger Hotel, St. Joseph's Catholic Church, St. Mark's Episcopal Church, and the German-English School, as well as the Steves, Eagar, Halff, Groos, and Oppenheimer Houses. In addition he ran businesses from a bank to a brewery, and served as city alderman and fire captain. This study brings to light an important chap­ter in the formation of the urban fabric of San Antonio and its evolution into a multi-cultural community. Valentine explores the built environment as it exemplified the social, political, and economic history.

Maggie Valentine was born and raised in Southern California. She graduated from UCLA with a PhD in architecture and urban planning. She has taught architectural history and planning at UCLA, California State University, and Montana State University, and is currently a professor at the University of Texas San Antonio. In addition to her critically acclaimed book, The Show Starts on the Sidewalk , she has been published in several anthologies on regional architecture and cinema history.
Loading...
or
Not Currently Available for Direct Purchase