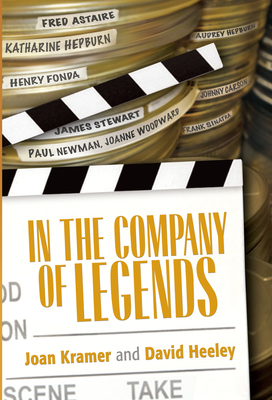 In the Company of Legends

Starting with their award winning profiles of Fred Astaire in 1980, Joan Kramer and David Heeley documented the lives and careers of many Hollywood legends, establishing a reputation for finding the un-findable, persuading the reluctant, and maintaining unique relationships long after the end credits rolled. These were recognized as high-quality, definitive film portraits, which revitalized the genre and made it a mainstay of television programming.

This is their insiders’ view of the famous and the powerful: Katharine Hepburn, James Stewart, Johnny Carson, Frank Sinatra, Lew Wasserman, Ronald Reagan, Paul Newman, Joanne Woodward, Jane Fonda, Richard Dreyfuss, Audrey Hepburn, and Bette Davis, among others. Kramer and Heeley’s behind the scenes stories of the productions and the personalities involved are amusing, sometimes moving, often revealing, and have never been told before.

Born in Chicago, IL, Joan Kramer was a ballet dancer and assistant choreographer before starting her career in film and television production. She was an assistant talent co-ordinator for The Dick Cavett Show, associate producer for a Candid Camera Special, and writer for Live From Lincoln Center. She then joined the staff of WNET where she began her long producing partnership with David Heeley. For public television and later for their own company, Top Hat Productions, they created profiles of some of the most famous and well-respected personalities in the entertainment industry, and maintained personal relationships with many of them, their families and friends. Their programs have received five Emmy awards, twenty Emmy nominations, and many other national and international honors. Joan Kramer lives in New York.

David Heeley was born in the north of England. After graduating from Oxford University in 1961, he joined the BBC in London, initially as an engineer, eventually becoming a staff director. In 1969 he moved to New York, where he worked first for public television’s WNET, and later Top Hat Productions, which he owned with Joan Kramer. He has received many awards, including six Emmys, has been nominated for three Directors Guild of America awards, and has taught a course on directing at New York University’s School of Continuing and Professional Studies. He was executive producer of the WNET/PBS series Nature from its premiere in 1982 until 1991, and has produced a number of acclaimed documentary profiles together with Joan Kramer.

With an entertainment career spanning more than four decades, Academy Award-winning actor Richard Dreyfuss has been one of America’s most versatile and individualistic actors. He is also Founder and President of The Dreyfuss Initiative, a nonprofit organization committed to revitalizing America’s civic culture. He serves on the American Bar Association’s Education Committee, the Board of the National Constitution Center, and was Senior Research Advisory Member of St. Antony's College, Oxford University.