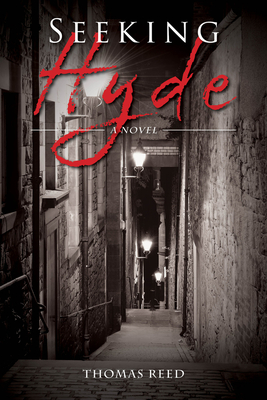 Thomas Reed’s debut novel, Seeking Hyde, recounts the fascinating history of Robert Louis Stevenson’s epic horror story, Strange Case of Dr. Jekyll and Mr. Hyde. It is the tale of a young author defying his father’s wishes by becoming a spinner of romantic yarns. It is the tale of his American wife, ten years older than he, driving her husband hard to write one more great novel before his chronic lung disease carries him away. It is the tale of Stevenson reeling under charges from the mother of an old friend that he had fueled her son’s fatal alcoholism through his recklessly Bohemian ways.

Seeking Hyde sticks closely to the biographical record as Robert Louis Stevenson struggles to write another book to be the successor to Treasure Island. After the infamous two characters, Dr. Jekyll and Mr. Hyde, take form in a dream, Stevenson writes passionately for three days, convinced that he has crafted his masterpiece. His wife Fanny, a willful and demanding gypsy, offers a scathing critique, obliging him to start over from the beginning. While the revised tale is published to great acclaim, it is ultimately blamed for inspiring a gruesome series of murders in London’s East End. From that tragic historical irony, Seeking Hyde moves beyond the actual story of how Jekyll and Hyde came to be to explore the realm of “what if?” Desperate to address his own guilt, Stevenson enters the dark underworld of Victorian London. As he follows a twisted path through this midnight landscape, the author-turned-detective wrestles with the social demons of prostitution, police corruption, and the hypocrisy of powerful men—ultimately coming face-to-face with Jack the Ripper himself.

Thomas Reed has spent twenty years exploring, teaching, and writing about the life and times of Robert Louis Stevenson. His non-fiction book, The Transforming Draught: Jekyll and Hyde, Robert Louis Stevenson, and the Victorian Alcohol Debate (McFarland, 2006), examines the outsized role of Drink in Stevenson’s career and culture. In the course of his research, Reed stumbled across a profound historical irony rooted in the social impact of Stevenson’s famous novel. Only by stepping into the realm of fiction could he explore the strange turnings of the author’s fate in a way they positively cried out for.

Thomas Reed studied at Yale, the University of Virginia, and Oxford, and spent three decades teaching Victorian and medieval literature at Dickinson College, in Carlisle, Pennsylvania. He recently moved to Sarasota, Florida, to take up writing full time, where he lives with his wife Dorothy and writes each day at his grandfather’s antique desk. On occasional afternoons, they stroll to the local tiki bar to enjoy the sunset and raise a glass to the spirit of Stevenson.