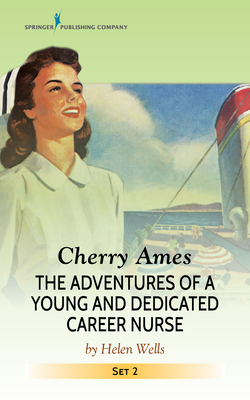 
Cherry Ames, Flight Nurse
In Flight Nurse, the United States is still fighting World War II. Cherry Ames is still an Army Nurse, this time aloft--as a flight nurse. Cherry is reunited with her corpsman Bunce--the two of them are in sole charge of ferrying severely wounded men out of the battlefield and to the nearest Army hospital. Much to Pilot Wade Cooper's chagrin, he has been taken off bomber duty to fly the wounded to safety--until Cherry makes him see otherwise. Off duty, the nurses adopt 6-year-old Muriel Grainger, who has known nothing but war in her short life, and whose mother has been killed by the Germans. Her father is often out on mysterious errands that cause some to label him a spy. Cherry makes it her risky business to find out if this is truth or rumor.
Cherry Ames, Veterans' Nurse
In Veterans' Nurse, the war is over, and Cherry is sent home. Her new assignment is working in a veteran's hospital, where she finds her biggest challenge in raising the spirits of men who have lost arms, legs, or other body parts. Will they be welcomed back to their families and able to work again? Jim Travers, the woodworker who has lost a leg and was the sole support of his elderly mother, isn't convinced. But he finds he is of critical assistance to Cherry as she tracks the mysterious thief who has robbed the Veteran's Centeer of a medicine that can help a small boy recover from a deadly disease.
Cherry Ames, Private Duty Nurse
In Private Duty Nurse, Cherry has finally been discharged from the Army and is back to civilian life. What should she do next after her intense years of Army nursing? Dr. Joe finds her a job as the private nurse of a celebrated musician suffering from a dangerous heart condition. How can Cherry help him avoid the deadly stress his devoted sister unintentially causes when she visits fortuneteller after fortuneteller? Will their family secret be revealed?
Cherry Ames, Visiting Nurse
In Visiting Nurse, Cherry reunites with her old Spencer classmates Gwen, Bertha, Josie, Vivian, and Mai Lee, when they all decide to take an apartment together in New York City, and work for the Visiting Nurse Service of New York. Greenwish Village is a far cry from Hilton, Illinois, and farm-raised Bertha is ready to mutiny when she tries to cook in their tiny kitchen. Assigned to a specific neighborhood, Cherry marvels at the many countries her patients come from--and is determined to resolve the loneliness of a few of them by having them all meet at an Around the World Dinner at the local settlement house. But who is the mysterious woman who lives in the Victorian mansion at the center of her district? Why hasn't she been seen by anyone in the past 18 years?