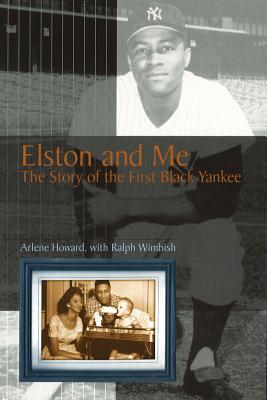 The Story of the First Black Yankee

Of all the great ballplayers to wear Yankee pinstripes, Elston Howard was among the proudest. Remarkable temperament and courage made him the Jackie Robinson of baseball's most storied franchise. No Yankee carried himself with more dignity. No Yankee had greater respect for his teammates or love for his wife and family. And no one loved being a Yankee more than Elston Howard. In Elston and Me, Howard's widow, Arlene, and coauthor Ralph Wimbish recall the life of the first black to play baseball for the New York Yankees. Howard, who played fourteen major-league seasons, was signed by the Yankees in 1950, but the reluctance of the Yankee organization to break the color barrier held Howard back from the major leagues until 1955 when he was twenty-six years old. By 1961, the year he batted .348 for the Yankees, Elston had become the everyday catcher. Voted the American League's Most Valuable Player in 1963, Howard was a three-time Gold Glove winner, and his fielding average of the same year remains one of the highest among catchers in major-league history. In 1967, with the Yankee dynasty in decay, Elston was traded to the Boston Red Sox, although Yankee management had promised him that he would finish his career in pinstripes. After contemplating retirement, he moved to Boston late that season and helped the Red Sox win the "Impossible Dream" pennant. After one more season with the Red Sox, he returned to the Yankees as the first black coach in the American League. Howard died at the age of fifty-one without fulfilling his dream of becoming baseball's first black manager. Beginning with Howard's early years as a St. Louis teenager, the book relates his encounters with racism and his love of baseball. He began his professional career for the legendary Negro League team the Kansas City Monarchs. His three decades with the New York Yankees include numerous anecdotes about fellow Yankee legends such as Mickey Mantle, Whitey Ford, and Yogi Berra. With countless personal moments and never-before- published photographs and clippings from family albums, Elston and Me is the touching story of one of baseball's great players.

Praise For Elston and Me: The Story of the First Black Yankee…

"The first book to describe the life and career of the first African-American to play for the most notorious bastion of the tradition of white baseball in the post-1947 era, the New York Yankees—a man, moreover, who was both a truly fine baseball player and ultimately a significant baseball presence in the country's most important baseball market."—Reed S. Browning

Arlene Howard resides in Teaneck, New Jersey, with her daughter Cheryl. She remains active within her community, serving on the board at her church and on the Fresh Air Fund in New York City. Ralph "Micky" Wimbish is the assistant sports editor for the New York Post. His father, Dr. Ralph Wimbish, was a civil rights leader who helped black ballplayers fight discrimination.
Loading...
or
Not Currently Available for Direct Purchase