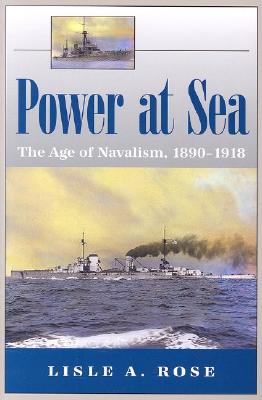 The twentieth century was preeminently an age of warring states and collapsing empires. Industrialism brought not peace but the sword. And the tip of that sword was sea power.In Power at Sea, Lisle A. Rose gives us an unprecedented narrative assessment of modern sea power, how it emerged from the Age of Fighting Sail, how it was employed in war and peace, and how it has shaped the life of the human community over the past century and a quarter. In this first volume, Rose recalls the early twentieth-century world of emerging, predatory industrial nations engaging in the last major scramble for global markets and empire. In such times, an imposing war fleet was essential to both national security and international prestige. Battleship navies became pawns of power politics, and between 1890 and 1914 four of them--Britain’s Royal Navy, the Imperial German Navy, the Japanese Navy, and the U.S. Navy--set the tone and rhythm of international life.Employing a global canvas, Rose portrays the increasingly frantic naval race between Britain and Germany that did so much to bring about the First World War; he takes us aboard America’s Great White Fleet as it circumnavigated the world between 1907 and 1909, leaving in its wake both goodwill and jealousy; he details Japan’s growing naval and military power and the hunger for unlimited expansion that resulted.Important naval battles were fought in those days of ostensible peace, and Rose brings to life the encounters of still young and relatively small industrial fighting fleets at Manila Bay and Tsushima. He also takes us into the huge naval factories where the engines of war were forged. He invites us aboard the imperial battleships and battle cruisers, exploring the dramatically divided worlds of the officers’ lordly wardroom with its clublike atmosphere and the often foul and fetid enlisted men’s quarters.The Age of Navalism climaxed in the epic First World War Battle of Jutland, in which massive guns and maneuvering dreadnoughts determined that Imperial Germany would become the latest in a line of ambitious naval powers that failed to shake Britannia’s rule of the waves. Germany’s subsequent use of a revolutionary new strategy, unrestricted submarine warfare, nearly brought Britain to its knees, reduced the level of naval combat to barbarism, and brought the United States into the war with its own substantial navy, ultimately turning the tide of battle.Focusing as much on social issues and technological advances as on combat, Power at Sea: The Age of Navalism tells a compelling story of newfound power that is fascinating in its own right. Yet, it is merely a prologue to more startling accounts contained in the author’s succeeding volumes.