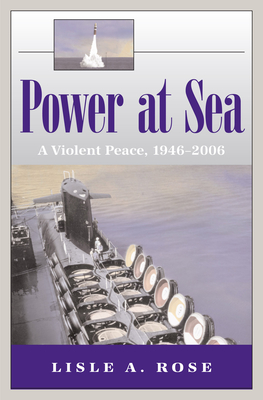 Bringing to a close his epic recounting of naval power in the twentieth century, Lisle Rose describes the virtual disappearance after 1945 of all but one great navy, whose existence and operations over the next sixty years guaranteed a freedom of the seas so complete as to be at once universally acknowledged and ignored.In the first twenty years after World War II, the U.S. Navy continued the revolutionary transformation of sea power begun in the 1930s with the integration of sea, air, and amphibious capabilities. Between 1946 and 1961, the United States placed on, above, and beneath the world’s oceans the mightiest concentration of military power in history. Supercarriers filled with aircraft capable of long-range nuclear strikes were joined by strategic ballistic missile submarines, even one of whose sixteen nuclear-tipped missiles could devastate most of an enemy’s major urban centers together with its industrial and military infrastructure.Such a fleet was incredibly costly. No ally or adversary in a world recovering slowly from global war could afford to build and maintain such an awesome entity. Its needs constantly had to be balanced against competing requirements of a broader national defense establishment. But the U.S. Navy ensured an unchallenged Pax Americana, and its warships steamed where they wished throughout the globe in support of a policy to contain the influence and threat represented by the Soviet Union and China.The 1962 Cuban missile crisis, however, galvanized the Soviet leadership to construct a powerful blue-water fleet that within less than a decade began to challenge the United States for global maritime supremacy, even as its own ballistic missile boats posed a massive threat to U.S. national security. While the Soviets enjoyed the luxury of building exclusively against the U.S. Navy and challenging it at almost every point, America’s sailors were increasingly burdened by a broad array of specific missions: fighting two regional wars in Asia, intervening in Lebanon, protecting Taiwan, aiding in the preservation of Israel, and maintaining close surveillance of Cuba, chief among them. Confronting ever-growing Soviet sea power stretched U.S. capabilities to the limit even as the fleet itself underwent revolutionary changes in its social composition.The abrupt decline and fall of the Soviet Union after 1989 led to another reappraisal of the importance, even necessity, of navies. But the turbulent Middle East and the struggle against international terrorism after 2001 have demanded a projection of sea-air-amphibious power onto coasts and adjacent areas similar to that which America’s fleets had already undertaken in Korea, Vietnam, and Lebanon.The U.S. Navy now sails on the front line of defense against terrorism—a threat that confronts strategists with the greatest challenge yet to the ongoing relevance of maritime power. This third volume of Rose’s majestic work offers readers an up-close look at the emergence of America’s naval might and establishes Power at Sea as essential in tracing the emergence of U.S. dominance and understanding the continuing importance of ships and sailors in international power plays.