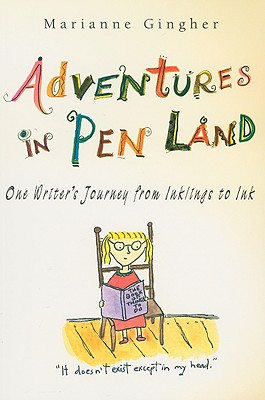 One Writer's Journey from Inklings to Ink

She invites us along on a raucous tour of soul-sucking jobs, marriage, and a teaching career, with accompanying disquisitions on blasphemous reading preferences, ’60s pop culture, writing workshops, and other amusing detours and distractions on the way to publication. She also shares her keen insights into the role of a Southern writer in American literary culture, the experience of writing as a mother, and the process of novel-writing as compared to a lengthy family car trip.
Featuring guest appearances by other writers such as Fred Chappell, Max Steele, and Annie Dillard plus cameos by the likes of Patty Hearst, Richard Nixon, and Bon Jovi, Adventures in Pen Land celebrates writing as a form of play that Gingher has never outgrown. The lighthearted illustrations by novelist Daniel Wallace (author of Big Fish) serve to reinforce this refreshing message as they depict one writer and her imagination growing up together. Adventures in Pen Land conveys a writer’s sheer doggedness, with a few bones of advice tossed in along the way. Candid and irreverent, but always humane, this memoir is must reading for fans of Southern literature, students of creative writing, and anyone who can’t resist the treat of reading about a writer’s resilience and dedication to her craft.

Praise For Adventures in Pen Land: One Writer's Journey from Inklings to Ink…

“I couldn't put it down! It's engaging, funny, unpretentious, and beautifully captures the trials and tribulations, the lows but also the highs of finding one's voice as a writer. Marianne Gingher is a perfect-pitch storyteller—and not because she's Southern! We who are writers know what hard work it is to weave her magic, and how the ultimate magic is to make it look easy and fun. This memoir will be a godsend to young and not-so-young writers struggling to believe in their work. Marianne Gingher not only tracks the writer's journey from first-grade assignment to first novel, but actually tracks a whole generation from the `50s onward, our coming of age, on the page and in the life!”—Julia Alvarez, author of Saving the World

"Reading makes me want to write in the same way a whiff of chocolate makes me salivate,” says Marianne Gingher in this hilarious and insightful book. Adventures in Pen Land presents the call to the writing life as one of joy and opportunity rather than angst and longing. Gingher traces the circuitous and potholed road to the publication of a first novel, Bobby Rex’s Greatest Hit—a slice of teenage Americana acclaimed as “funny, richly detailed, often charming” (New York Times), “a rich and evocative portrait of an era” (Library Journal)—as she follows the trajectory of her writing life from its earliest inklings.

Marianne Gingher is the author of four previous books, including Bobby Rex's Greatest Hit, which was made into an NBC movie and, most recently, A Girl's Life: Horses, Boys, Weddings and Luck. Her fiction and essays have appeared in various periodicals, including the Southern Review, the Oxford American,North American Review, the Washington Post Magazine,Redbook,Seventeen, and the New York Times Book Review. A Girl's Life received a 2001 Best Book of the Year award from Foreword magazine. The mother of two grown sons, she currently lives in Greensboro, North Carolina, and is Associate Professor of English in the Creative Writing Program at the University of North Carolina–Chapel Hill.
Loading...
or
Not Currently Available for Direct Purchase