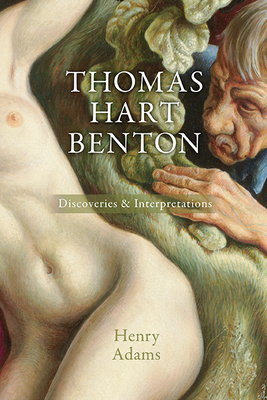 Now, in a series of provocative essays, premier Benton scholar Henry Adams examines the many facets of the man as artist and the pitched battles of his long career, including the fight that raged over the subject matter of his murals, the real reasons for Benton’s feud with the radical left and his fall from grace in the New York art world, and his tumultuous, 36-year-long love-hate relationship with the student with whom he worked most closely, another iconic artist of the 20th century, Jackson Pollock. Adams ends with an account of his own twenty-five-year struggle to expose fakes of Benton’s work.

Henry Adams is a graduate of Harvard University and received his MA and Ph.D from Yale, where he received the Frances Blanshard Prize for the best doctoral dissertation in Art History. He is the author of more than 350 publications on American art, including Eakins Revealed, which Andrew Wyeth described as "without question the most extraordinary biography I have ever read on an artist." Currently the Ruth Coulter Heede Professor of Art History at Case Western Reserve University, he is widely regarded as the foremost scholar of Thomas Hart Benton's work. He was the curator of the centennial exhibition of Benton's work at the Nelson-Atkins Museum in 1989. In partnership with film maker Ken Burns, he developed a documentary film on Benton which was broadcast nationally on PBS to an audience of over 20 million.

“Thomas Hart Benton is an extremely valuable book for the student of American Culture, as Adams does an excellent job of going beyond the analysis of the murals, illustrations, and easel paintings, with regard to style and subjects, by integrating the art with the travels, writings, and political setting in which the artist was born and matured.”—Journal of American Culture

“His in-depth study of Benton’s artistic abilities at Martha’s Vineyard, his insightful analysis of Benton’s technical process in drawing and printmaking, and his illuminating discussion of authentication and connoisseurship not only add to our understanding of Benton, but also make a meaningful contribution to a scholarly field that too often excludes dealers, collectors, and other actors and aspects of the art market.”—The Annals of Iowa

“Adams’s detailed and knowledgeable analyses of Benton’s work makes clear that the man was an impressive and original twentieth-century figure—a creator, a writer, a musician, and a teacher.”—Gateway, the magazine of the Missouri History Museum

“If you read only one book on Thomas Hart Benton, read this one. It takes a balanced approach.”—Kansas History

“A helpful and heartfelt compendium of all things Benton by a scholar who remains intrigued by his subject, and committed to pronouncing his significance on multiple fronts.”—Missouri Historical Review

“Adams’s Benton differs from the standard image of the artist presented in survey books. This fascinating book gives readers an array of perspectives on Benton’s life, art, and career.”—Indiana Magazine of History

“Unfailingly interesting, this book should be a basic text for students in American art and cultural studies. It should also be required reading for anyone interested in the history of ideas (even mistaken ones) and the tangled interfaces between art, politics, and living. The Benton who emerges here—cultivated, emotional, a bit of a hick, an aesthetic experimenter—is a new Benton, a towering figure in the history of American painting. He’s Harry Truman and an old master muralist rolled into one, a movie star and a one-man show.”—Karal Ann Marling, Professor Emeritus of Art History and American Studies, University of Minnesota
or
Buy Here
Copyright © 2020 American Booksellers Association