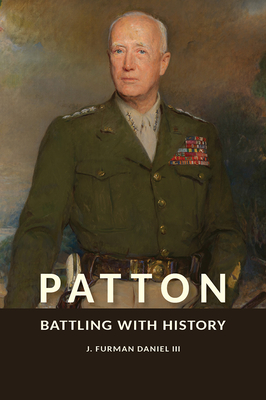 General George S. Patton Jr. is one of the most successful yet misunderstood figures in American military history. Despite the many books and articles written about him, none considers in depth how his love of history shaped the course of his life. In this thematic biography, Furman Daniel traces Patton’s obsession with history and argues that it informed and contributed to many of his successes, both on and off the battlefield.

Patton deliberately cultivated the image of himself as a warrior from ages past; the more interesting truth is that he was an exceptionally dedicated student of history. He was a hard worker and voracious reader who gave a great deal of thought to how military history might inform his endeavors. Most scholars have overlooked this element of Patton’s character, which Daniel argues is essential to understanding the man’s genius.

“Highlights the importance of historical method and critical thinking about what individuals say and why they say it.” —John Nelson Rickard, Canadian Armoured Corps, author of Advance and Destroy: Patton as Commander in the Bulge


“Furman Daniel penetrates the myth of George Patton to provide an understanding not only of the man, but also the elements of his character that made him an extraordinary historical figure. In doing so he highlights the importance of intellectual curiosity and historical mindedness to effective leadership in the military and beyond. This book should be read not only by those interested in military history, but also those interested in leadership and character development.”—H. R. McMaster, former National Security Advisor, author of Battlegrounds and Dereliction of Duty

“J. Furman Daniel III's Patton: Battling with History is an outstanding book and a great addition to the many books that have been written on General George S. Patton. Furman gives a great and readable account of Patton's life, especially his years as the most successful U.S. battlefield commander in the European theater. He also shows how Patton—a lifelong learner—was able to improve his strategic and operational acumen by a deep study of world history. No Patton worshipper, Furman points out Patton's faults, his outsize ego, battlefield errors, and even a few areas where this studious general committed historical malpractice. For the author, Patton was not a reincarnated natural warrior, but a dedicated student of history and the military art, something often lacking in today's generals and admirals. Well researched and clearly written, this book is a must-read for historians and military officers.”—Joseph J. Collins, Security Studies Program, Georgetown University, University Professor, ret., National Defense University

“Patton: Battling with History provides fascinating new insights into General George S. Patton, Jr. as both a soldier and a scholar.  In the process, it highlights the vital importance of the study of history to the military profession.”—Thomas G. Mahnken, Johns Hopkins SAIS, editor of Competitive Strategies for the 21st Century: Theory, History, and Practice

“An impressive work of exhaustive and meticulous and original scholarship, ‘Patton: Battling with History’ offers an extraordinary perspective on an inherently fascinating personal life and military career of one of the most charismatic and controversial members of the American armed forces before and during World War II. An extraordinarily informative and unreservedly recommended addition to the growing library of World War II histories and biographies.”—Midwest Book Review

"I recommend this book to all readers interested in Patton, leadership, command, or World War II."—Robert J. Rielly, Military Review

“An interesting and somewhat different approach to a biography. The author makes a consistent and well reasoned case for his main thesis  throughout the text. This book is definitely recommended for anyone interested in Patton, as well as for those interested in the influence of history on military leaders’ decisions."—Gordon Bliss, Journal of America’s Military Past

“Patton: Battling with History is an opportune outlet for Daniel’s focus on the student and the soldier, and Daniel shows how each vocation required the general’s diligence. The book is written for academic shelves yet has inherent popular appeal.”—ARMY

“. . . A fine example of well-documented scholarship. . . . This is an important book that thoroughly examines an overlooked facet of Patton’s controversial career and his flawed character.”—On Point: The Journal of Army History

J. Furman Daniel III is an Assistant Professor in the College of Security and Intelligence at Embry-Riddle Aeronautical University. He is the editor of 21st Century Patton: Leadership Lessons for the Modern Era and a co-author of The First Space War: How Patterns of History and Principles of STEM Will Shape Its Form. He lives in Prescott, Arizona.