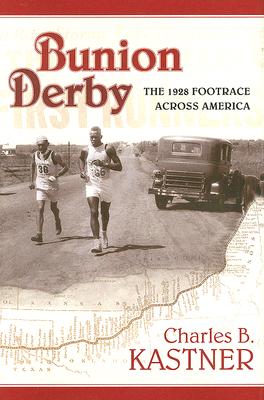 The 1928 Footrace Across America

On March 4, 1928, 199 men lined up in Los Angeles, California, to participate in a 3,400-mile transcontinental footrace to New York City. The Bunion Derby, as the press dubbed the event, was the brainchild of sports promoter Charles C. Pyle. He promised a $25,000 grand prize and claimed the competition would immortalize U.S. Highway Route 66, a 2,400-mile road, mostly unpaved, that subjected the runners to mountains, deserts, mud, and sandstorms, from Los Angeles to Chicago.

The runners represented all walks of American life from immigrants to millionaires, with a peppering of star international athletes included by Pyle for publicity purposes. For eighty-four days, the men participated in this part footrace and part Hollywood production that incorporated a road show featuring football legend Red Grange, food concessions, vaudeville acts, sideshows, a portable radio station, and the world's largest coffeepot sponsored by Maxwell House serving ninety gallons of coffee a day.

Drawn by hopes for a better future and dreams of fame, fortune, and glory, the bunioneers embarked on an exhaustive and grueling journey that would challenge their physical and psychological endurance to the fullest while Pyle struggled to keep his cross-country road show afloat.

In a wild grab for glory, a cast of nobodies saw hope in the dust: blacks who escaped the poverty and terror of the Old South; first-generation immigrants with their mother tongue thick on their lips; Midwest farm boys with leather-brown tans. These men were the 'shadow runners, ' men without fame, wealth, or sponsors, who came to Los Angeles to face the world's greatest runners and race walkers. This was a formidable field of past Olympic champions and professional racers that should have discouraged sane men from thinking they could win a transcontinental race to New York. Yet they came, flouting the odds. Charley Pyle's offer of free food and lodging to anyone who would take up the challenge opened the race to men of limited means. For some, it was a cry from the psyche of no-longer-young men, seeking a last grasp at greatness or a summons to do the impossible. This pulled men on the wrong side of thirty from blue-collar jobs and families.--from the Preface.