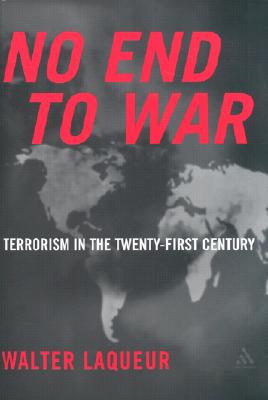 No End to War (Hardcover)

Terrorism in the Twenty-First Century

While the destruction of the World Trade Center and the strike against the Pentagon shocked the world at large, experts on terrorism like Walter Laqueur couldn't feign complete surprise. In No End to War, Laqueur, who has devoted three decades to the study of political violence, answers the most-often raised questions about terrorism in the light of 9/11 and the still unsolved Anthrax letters. First, what constitutes terrorism? What is new about the "new" terrorism? Why is the Muslim world the most potent breeding ground of this new terrorism? To what extent is religion itself a factor? Is there a clash of civilizations between the Muslim world and the largely Christian or post-Christian West? Is America at fault? Israel? Did European nations turn a blind eye to terrorists and their sympathizers in their midst? To what extent are poverty and oppression the causes of terrorism? What is the likelihood that terrorists will obtain weapons of mass destruction-chemical, biological, or nuclear? Why was the United States unprepared for 9/11? Why the intelligence failure? Are Islamic terrorists the only terrorists we need to fear? What about other terrorists from the right of the left, ecoterrorists or anti-globalization terrorists? And finally, what is the best defense against terrorism?>

WALTER LAQUEUR served as the director of the Institute of Contemporary History in London and concurrently the chairman of the International Research Council of CSIS in Washington for 30 years. He was also a professor at Georgetown University and the author of more than twenty-five books on Europe, Russia, and the Middle East. He has had articles published in The New York Times, The Washington Post, and countless other newspapers worldwide. His books include The Last Days of Europe , Putinism, and After the Fall.
or
Not Currently Available for Direct Purchase
Copyright © 2020 American Booksellers Association