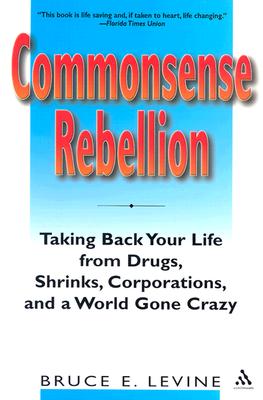 Taking Back Your Life from Drugs, Shrinks, Corporations, and a World Gone Crazy

In recent years the mental health industry has been attacked for the invalidity of its illnesses, the unreliability of its diagnoses, the dangers of its treatments, and its corruption by drug companies. Commonsense Rebellion integrates those critiques and goes further.Nearly 1 in 4 American adults take psychiatric drugs, and Ritalin production has increased 800 percent since 1990. Yet the mental health industry laments the fact that two-thirds of us with diagnosable mental disorders do not seek treatment. This book argues that "institutional mental health's" ever-increasing diseases, disorders, and drugs have diverted us from examining an important rebellion against an increasingly impersonal and coercive "institutional society" which worships speed, power, and technology. This has created fantastic wealth - at least for some - but its disregard for human autonomy, community, and diversity has come with a cost. Depression has reportedly increased tenfold since 1900, and suicide levels for teenage boys have tripled since 1960. Have human genetics and serotonin levels changed that much, or has society?

Bruce E. Levine, Ph.D., a clinical psychologist in private practice for more than fifteen years, is on the advisory council of the International Center for the Study of Psychiatry and Psychology, which fights against the drugs, electroshocks, and other abuses of institutional mental health. He lives in Cincinnati, OH
Loading...
or support indie stores by buying on