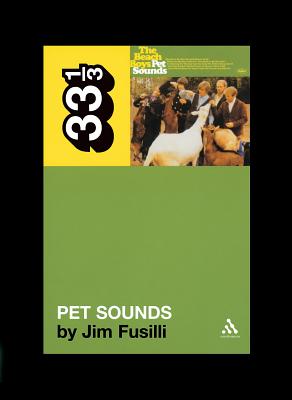 Pet Sounds is, rightly, one of the most celebrated pop albums ever released. It has also been written about, pored over, and analyzed more than most other albums put together. In this disarming book, Jim Fusilli focuses primarily on the emotional core of the album, on Brian Wilson's pitch-perfect cry of despair. In doing so, he brings to life the search for equilibrium and acceptance that still gives Pet Sounds its heart almost four decades after its release.

For all the ups and downs, the scandals and, finally, the good times that are associated with Brian Wilson and the Beach Boys, nothing can diminish the beauty of Pet Sounds - its sense of adventure, its insight into the boundless mysteries of young love and how all its elements seem to coalesce to lay bare an insecure teen confronted by the uncertainties of adulthood, a man who wishes life were as simple as he believed it once was. More than a wonderful work that has easily withstood the test of time, Pet Sounds raises pop to the level of art through its musical sophistication and the precision of its statement which, taken together, celebrate the fulfillment of Brian Wilson's ambition.

Jim Fusilli is chief rock music critic for the Wall Street Journal and a frequent contributor to National Public Radio's All Things Considered. In addition, he is the author of the award-winning mystery series featuring private investigator Terry Orr and his daughter Bella. The series includes Closing Time, A Well-Known Secret, and Tribeca Blues. The fourth novel in the series, Hard, Hard City, was published by G. P. Putnam in the fall of 2004.
or support indie stores by buying on
Copyright © 2020 American Booksellers Association