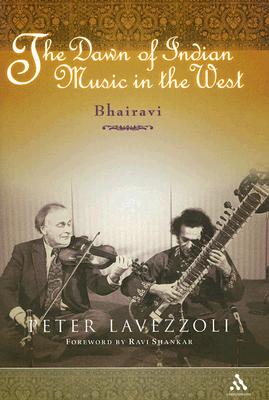 The Dawn of Indian Music in the West (Hardcover)

A little more than 50 years ago, in 1955, Ali AkbarKhan issued an LP called "Music of India: Morning and Evening Ragas," with spoken introduction by violinist Yehudi Menuhin. Until then, Indian music was terra incognita in the West. When the same album was reissued as a CD in 1995, under the title "Then and Now," it was nominated for a Grammy.

In the last 50 years, there has been the explosive influence of Indian music and culture in the West. Words such as karma, yoga, raga, nirvana, all once unknown here, have entered the language. Most famously, the wonders of the Indian musical world were spread by George Harrison and the Beatles. The music also had a profound effect on Mickey Hart and the Grateful Dead, John McLaughlin (Mahavishnu Orchestra), the Byrds, John Coltrane, and many others. The annus mirabilis 1967 saw the Maharishi Mahesh Yogi spreading the wonders of transcendental meditation, Swami Prabhupada founding the International Society for Krishna Consciousness in New York City, and the growing influence of Ravi Shankar. Four years later, George Harrison organized the groundbreaking Concert for Bangladesh, the first charity event of rock. Shankar had already wowed audiences at the Monterey Pop Festival, and he achieved stardom at the Madison Square Garden event. (Where Westerners, new to the sounds they heard, applauded after the musicians had finished tuning their instruments )

Peter Lavezzoli, a Buddhist and a musician, has a rare ability to articulate the personal feeling of music, and at the same time narrate a history. Lavezzoli has interviewed more than a score of musicians, such as Ravi Shankar, Ali Akbar Khan, David Crosby, Philip Glass, Zakir Hussain, Mickey Hart, Zubin Mehta, and John McLaughlin.

Peter Lavezzoli is the author of The King of All, Sir Duke: Ellington and the Artistic Revolution, which is also published by Continuum. As a percussionist and vocalist, Lavezzoli explores the connection between musical and spiritual expression. He lives in Fort Lauderdale, FL
or
Not Currently Available for Direct Purchase
Copyright © 2020 American Booksellers Association