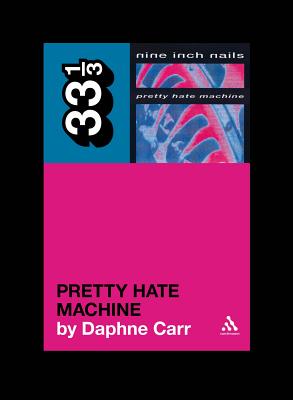 What is the world that Nine Inch Nails made, and what was the world that made Nine Inch Nails? These are the questions at the heart of this study of the band's 1989 debut, Pretty Hate Machine.
The album began as after-hours demos by mercenary new wave keyboardist Trent Reznor, and was disciplined into sparse industrial dance by a handful of the UK's best industrial producers. Carr traces how the album became beloved in the underground, found its mass at Lollapalooza, and its market at the newly opened mall store Hot Topic. For fans, Nine Inch Nails was a vehicle for questioning God, society, the family, sex, and the body. In ten raw, heartbreaking oral histories woven through the book, fans living in the post-industrial Midwest discuss the successes and failures of the American dream as they are articulated in Nine Inch Nails' music. Daphne Carr illuminates Pretty Hate Machine as at once singular and as representative of how popular music can impact history and change lives.

Daphne Carr is a Manhattan-based writer. She is the series editor of Best Music Writing and an editor at Current Musicology. Her music writing has appeared in numerous anthologies and publications including Out of the Vinyl Deeps, Listen Again: A Momentary History of Pop, the Village Voice, MOJO, The Nation, Stop Smiling, and Venus Zine. Find her at www.funboring.com.
Loading...
or support indie stores by buying on