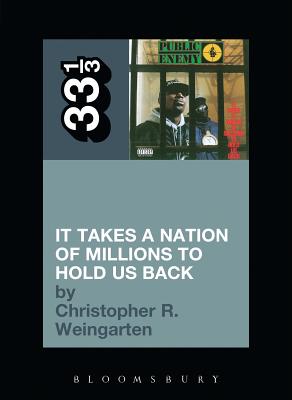 Christopher R. Weingarten provides a thrilling account of how the Bomb Squad produced such a singular-sounding record: engineering, sampling, scratching, constructing, deconstructing, reconstructing - even occasionally stomping
on vinyl that sounded too clean. Using production techniques that have never been duplicated, the Bomb Squad plundered
and reconfigured their own compositions to make frenetic splatter collages; they played samples by hand together in a
room like a rock band to create a not quite right tension; they hand-picked their samples from only the ugliest squawks and sirens.

Weingarten treats the samples used on Nation Of Millions as molecules of a greater whole, slivers of music that retain their own secret histories and folk traditions. Can the essence of a hip-hop record be found in the motives, emotions and energies of the artists it samples? Is it likely that something an artist intended 20 years ago would re-emerge anew? This is a compelling and thoroughly researched investigation that tells the story of one of hip-hop's landmark albums.

Christopher R. Weingarten is a professional freelancer living in Brooklyn, whose work can currently be seen in the Village Voice, RollingStone.com, Spin, Revolver, The Guardian, eMusic and much more. His speech, Twitter And The Death Of Music Criticism at the 140 Characters Conference in New York became a viral sensation in 2009. He reviewed 1000 of 2009's new records over Twitter on his account, @1000TimesYes. He is the shadowy figure behind hipsterpuppies.tumblr.com and is also the author of its corresponding book, upcoming via NAL/Penguin.
Loading...
or support indie stores by buying on