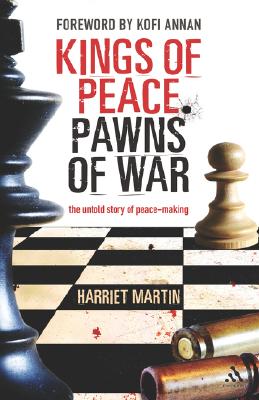 The Untold Story of Peacemaking

The secret world of international peace deals is exposed in Kings of Peace; Pawns of War, a ground-breaking new book that goes behind the scenes of televised handshakes to reveal what it really takes to broker peace in today's conflicts. Drawing on unparalleled access to some of the world's leading conflict mediators, Kings of Peace provides fascinating insights into the lengthy, fragile and often stormy process of transforming war into peace.
Lakhdar Brahimi, former Algerian Foreign Minister, brokered a deal in Afghanistan, before going on to help - albeit reluctantly - the Americans appoint a government in Iraq; Kenyan General Lazaro Sumbeiywo successfully talked the two sides in South Sudan - Africa's longest running war - into making peace; Peruvian diplomat, Alvaro de Soto, spent five years trying to resolve the Cyprus conflict, only to see his efforts fail at the final hurdle; Briton Martin Griffiths secured the first peace deal in Indonesia's troubled province of Aceh; and the Norwegians Erik Solheim and Vidar Helgesen managed to midwife the ongoing peace process in Sri Lanka. These are extraordinary individuals whose tireless efforts and personal conviction have succeeded in persuading hostile groups to stop fighting often after many others have abandoned peace efforts as a lost cause.
A powerful and important new book, Kings of Peace; Pawns of War shines an intriguing light on a profoundly secretive profession, in which a mediator will meet the American President one day and the world's most wanted terrorist the next, all in the name of brokering a peace deal. Above all, it explores the ethical tightrope that the mediators themselves inevitably walk, between being kings of peace and pawns of war.
"Few professions are more needed today -- and less understood -- than the job of an international conflict mediator. Harriet Martin's vivid story-telling helps us get inside the minds and hearts of six master mediators so we can learn what they do, why they do it, how they fail, and how they succeed. A wonderful read - I recommend it highly " -William Ury, co-author of Getting to Yes and author of Third Side.

"In this highly readable book, Harriet Martin has shed a bright light on the personalities and tactics of modern conflict mediators -- individuals who are rarely heralded, and almost never studied, and yet whose decisions affect the lives of millions. Martin's tales from the front will change the way we see the role of foreigners in conflict. The lessons she draws - if heeded - could dramatically improve the peace-makers' odds." -Samantha Power, Pulitzer Prize-winning author of A Problem from Hell: America and the Age of Genocide.

Harriet Martin covered the war in Bosnia for the Financial Times" and the Economist" in the mid-1990s, and subsequently worked at the BBC in London. She was a correspondent for the Independent" in Geneva before joining the United Nations as a speech writer and political analyst."
or
Buy Here
Copyright © 2020 American Booksellers Association