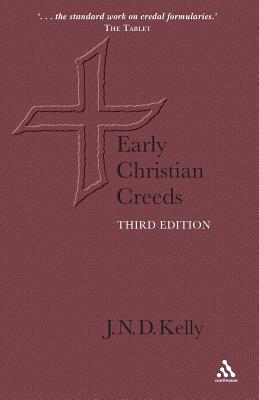 This is a comprehensive study of the well known and the not so well known creeds. Dr Kelly's famous book - a study of the rise, development and use of formularies in the creative centuries of the Church's history - was immediately acclaimed in Europe and America as the standard work on the subject. The book opens with an examination of creedal elements in the New Testament and continues with an enquiry into the relation of creeds to the rite of Baptism. The chapters that follow are devoted to a study of the evidence for 'the rule of faith' in the second century; a long discussion of the old Roman Creed; and a consideration of the creeds of the Eastern Church and their relation to Western creeds and to those propounded by the fourth-century councils. Particular attention is given to the Council of Nicea and the Nicene Creed. In addition, there is a lengthy and largely original reconstruction of the expansion of the Roman Creed and its acceptance throughout Europe as the present Apostle's Creed. Two valuable features of the book are the emphasis it lays on the liturgical setting of ancient creeds, and the attempt it makes to elucidate their theology as it was understood by those who framed them.

Until his retirement in 1979, J.N.D. Kelly was Principal of St Edmund Hall, Oxford and from 1948 to 1976 was University Lecturer in Patristic Studies there and is also a Fellow of the British Academy. Among his other books are Early Christian Doctrines. He died in 1997.
Loading...
or support indie stores by buying on