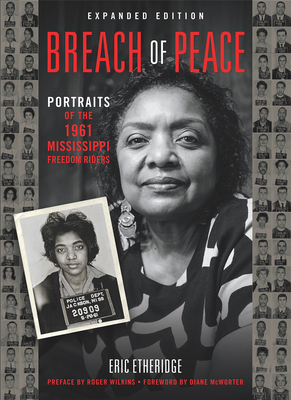 Portraits of the 1961 Mississippi Freedom Riders

Breach of Peace is a photo-history told in images old and new. The book includes the mug shots of all 329 Freedom Riders arrested in Jackson, Mississippi, along with contemporary portraits of 99 Riders, supplemented by interviews and brief bios. (The 2008 edition featured 84 Riders.)

In the spring and summer of 1961, several hundred Americans--black and white, male and female--entered Southern bus and train stations to challenge the segregated waiting rooms, lunch counters, and bathrooms. The Supreme Court had ruled that such segregation was illegal, and the Riders were trying to make the federal government enforce that decision.

Though there were Freedom Rides across the South, Jackson soon became the campaign's focus. The 329 Riders arrested there were quickly convicted of breach of peace. The Riders then compounded their protest by refusing bail. "Jail, no bail " was their cry, and they soon filled the city's jails. Mississippi responded by transferring them to Parchman, the infamous Delta prison farm, for the remainder of their time behind bars, usually about six weeks. New to the expanded edition are five portraits made in the maximum-security cells at Parchman during events commemorating the fiftieth anniversary of the Freedom Rides in 2011.

The mug shots of each Rider, bearing name, birth date, and other personal details, were duly filed away by agents of the Mississippi State Sovereignty Commission, a state investigative body dedicated to preserving white supremacy. By carefully preserving the mug shots, the Commission inadvertently created a testament to these heroes of the civil rights movement.